The Audi A7’s size means it’s spacious inside, as long as you’re only carrying four people. The boot is a decent size and folding rear seats are standard – unlike in the Mercedes CLS-Class saloon.

The Audi’s length doesn’t bode well for parking, however, with rear visibility a particular weak point due to the low roofline. It makes the optional rear-view camera something of a must-have.

You do get five seats in the Audi A7, but it’s best thought of as a four-seater, as the middle rear seat is narrow. There’s a similar amount of room as there is in the Audi A6 saloon and you can easily stretch out your legs, but headroom may be a problem for passengers over six feet tall due to the sloping roofline. 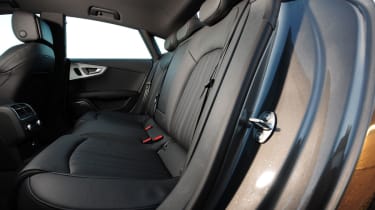 Storage space is decent; the glovebox is an adequate size and there’s a lidded storage box in front of the gearlever. There’s also a storage bin further back in the centre console and a hidden cubbyhole under the central armrest. The door bins are a little on the small side, but they’re still capable of holding slim bottles.

The Audi’s boot goes back a long way and offers 535 litres of luggage space with the seats up. The seats can be folded (something of a rarity on luxury cars) so the total space can be expanded to an impressive 1,390 litres. 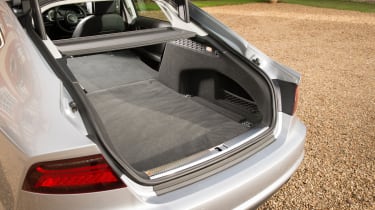 When the rear seats are in place, the boot is quite shallow, but its length comes in handy if you need to carry something awkwardly shaped from IKEA, for example. The hatchback tailgate means the space is easy to access, and therefore more useable than a saloon’s boot.