Despite its size, the Audi A7 Sportback corners very well

The A7 has been built using 20% aluminium to keep its weight down and improve its handling. But that doesn’t change the fact that it's still a very big car, weighing in at around 1,700kg. Nonetheless, Audi has accomplished its mission, because the A7 does indeed handle very well, with the optional quattro four-wheel drive improving traction further, especially in slippery conditions.

The steering isn’t quite up to par, however, proving less agile and responsive than that of the Mercedes CLS, so the A7 isn’t as much fun to drive overall. All models do come with Audi’s Drive Select system, though, allowing you to alter the suspension and steering settings to suit your preferences. In reality, you’ll probably end up fiddling with it a bit when you first get the car and leaving it as it is after that. 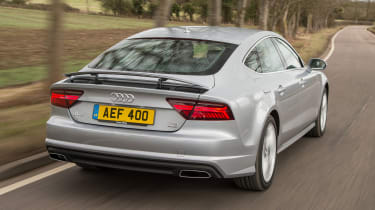 The Audi A7 Ultra is our pick of the range thanks to its mix of good performance and low running costs, while the new seven-speed S tronic automatic gearbox is slicker and smoother than the old eight-speed CVT auto. Unless you value speed over and above anything else, this is the engine and gearbox to go for, as its 7.3-second 0-62mph time is perfectly decent.

The twin-turbocharged BiTDI version is the quickest-accelerating model in the A7 range, leaping from 0-62mph in 5.2 seconds. The A7’s diesel engines remain largely competitive with those in the Mercedes CLS-Class, offering better performance across the range.

If you want the best performance possible, you need to go for the Audi S7 or RS7 models, which boast powerful V8 twin-turbo petrol engines and four-wheel drive that ensures lots of grip in corners and even sportier handling than the standard A7 Sportback. The standard RS7 has 552bhp, while a Performance version is tweaked to produce 597bhp. The latter is the quickest version of the A7 available and can get from 0-62mph in just 3.7 seconds. While it's incredibly fast in a straight line, it does feel slightly heavy and inert in corners, and perhaps its most appealing feature is its ability to easily become a relaxed cruiser, albeit one which always has masses of power on tap should you want it.