It might be a big car, but the A7 features some impressive technology to help give it the fuel-efficiency of a smaller model. Versions fitted with a V6 engine are equipped with a 48-volt mild hybrid system that harvests energy while you brake and stores it in a small lithium-ion battery. This electricity can then be used by other features in the car, taking some strain off the engine.

One such function allows the A7 to coast safely with the engine automatically switched off at speeds of between 34 and 99mph, then restart almost imperceptibly when you press the accelerator. A beefed-up alternator and clever software also means the start and stop system works more of the time, functioning at speeds below 13mph, then restarting more intuitively by using cameras to sense when the traffic ahead pulls away. 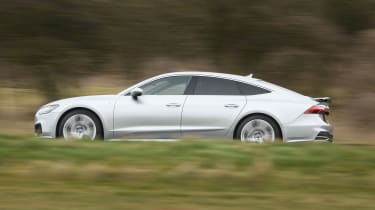 Audi is offering the A7 Sportback with a four-cylinder 2.0-litre diesel engine (the 40 TDI) for the first time, and it's sure to appeal to company-car drivers. Despite being a big car, it can return up to 49.6mpg and emits from 123g/km of CO2 with 19-inch alloy wheels fitted, placing it in a competitive Benefit-in-Kind (BiK) band for the luxury class. This is despite the fact it only has a 12-volt mild-hybrid setup that doesn't offer features like engine-off coasting.

The 3.0-litre 45 TDI and 50 TDI engines are thirstier, with up to 39.8mpg, along with a CO2 figure of 150g/km and a high BiK rating, making it expensive for company-car drivers.

The 3.0-litre V6 TFSI petrol 55 TFSI can return up to 30.7mpg and emits 167g/km of CO2, figures that don’t appear exceptional, but aren’t too bad considering the car’s performance. Its emissions also equate to the highest BiK band.

There's also a 2.0-litre TFSI option but the fact it still has quattro means it doesn't offer quite the economy boost you might expect. It can return up to 41.5mpg and emits 154g/km. It's far better when coupled with an electric motor in the plug-in hybrid Audi A7 55 TFSIe. This sees a large 14.1kWh battery pack fitted, giving its electric motor enough power for a 26-mile driving range. In theory many drivers will be able to carry out their commute without using a single drop of fuel, even with brief stints on the motorway. The powertrain can also act as a hybrid, juggling power between the electric motor and internal combustion engine depending on how the car is being driven. Charging the battery pack takes around 2.5 hours using a 7kW home wallbox. 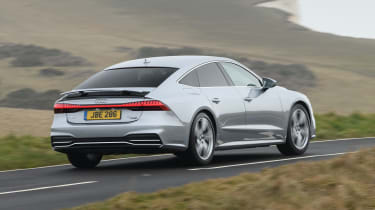 Like all other Audi models, the A7 comes with a standard three-year/60,000-mile warranty that can be extended if you pay an additional cost. This is fairly stingy, with BMW offering a three-year/unlimited-mileage warranty, and some manufacturers providing five or even seven years as standard.

Audi has fixed prices for its servicing, while also offering servicing plans. The latter allow you to pay upfront for a set period of maintenance, or spread the cost over monthly payments to make it easier to budget for servicing.