Audi A8 safety credentials are first class, but the brand's owner experience can prove variable

Audi is a brand that has long enjoyed a very positive image. Its cars are aspirational and desirable and obtaining the keys doesn't come cheap. However, among owners, the brand's reputation isn't quite as clear-cut. The marque is currently mid-ranking in our 2019 Driver Power survey results table.

It's not clear when – or if – this Audi A8 will be subjected to independent crash-testing, but it has enough crash-avoidance technology fitted as standard to minimise the likelihood of the worst happening.

Such is its relative scarcity on British roads, the Audi A8 has rarely featured in our Driver Power standings and it certainly wasn't included in our 2017 survey. However, enough Audi owners participated for the brand to be featured and it finished in a so-so 18th position out of 27 carmakers covered. Owners were positive about the car’s ride and handling, while engines and gearboxes were also praised.

Interior style and design also drew positive appraisals, although owners only ranked Audi 15th overall in this area, perhaps let down by restricted rear-seat room. A 10th-place finish for exterior style and finish was more encouraging, though.

In the all-important reliability and quality stakes, Audi finished in 17th place, with 15% of owners reporting at least one fault occurring during the first year of ownership. 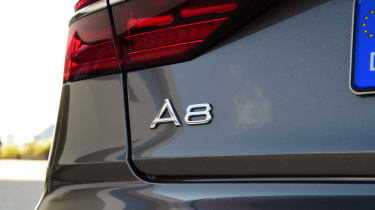 When Audi's advanced autonomous technology is allowed to be used to its fullest extent, the A8 will no doubt boast an even stronger set of anti-collision safeguards. Right now, though, autonomous emergency braking, active cruise control and lane-departure warning are standard, the latter of which includes emergency assistance to bring you back in line if you wander out of your lane.

Front and rear parking sensors are supplemented by a rear-view camera to minimise the risk of low-speed impacts while parking, and Audi's 'pre-sense' collision avoidance and mitigation system is on hand to further protect occupants. Over time, Audi's Level 3 autonomous features, including the ability to self-park without a driver on board, will be unlocked, but the technology it has at its disposal right now is already very impressive.