The Audi A8 is likely to prove expensive to run – the same is true of any luxury saloon in this part of the market. On the plus side, its fuel economy impresses for a car of this size, and the plug-in hybrid version will further reduce fuel consumption. However, keeping a car like this on the road doesn't come cheap.

It's disappointing, though perhaps inevitable, that the latest A8 should be heavier than its predecessor. Many weight-saving strategies were employed in its design and construction, including high-strength steel, carbon-fibre and magnesium components. 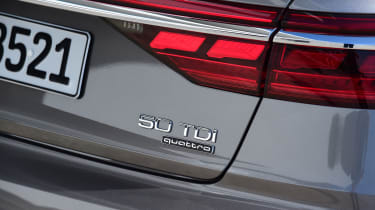 However, all its technology and equipment takes its toll and the A8 has put on up to 95kg in the metamorphosis into its current form. Despite this, though, fuel economy is definitely a strong suit, and Audi claims that up to 40.9mpg is possible in 282bhp 50 TDI form. We came close to achieving this result during our time behind the wheel. CO2 emissions of 193g/km attract the highest Benefit-in-Kind (BiK) tax for company-car users.

Another engine offered from the beginning is a 3.0-litre petrol 55 TFSI. This is claimed to return 29.4mpg, with emissions of 228g/km for the highest BiK rating. These figures apply to the entry-level 18-inch wheels – the larger 19 and 20-inch options bring an increase in emissions and a reduction in fuel economy.

Badged A8 60 TFSIe, the plug-in hybrid uses a V6 petrol but it’s paired with an electric motor and 14.1kWh lithium-ion battery pack. This provides an all-electric driving range of up to 29 miles, making it possible for many short trips to be completed with hardly any petrol at all. It can also be driven in hybrid mode, and when using navigation the car's computers will even work out the best power source to use along your route. Charging the battery pack takes around 2.5 hours using a 7kW wallbox and road tax is reduced by £10 a year. The 60 TFSIe plug-in hybrid returns a claimed combined fuel economy of 113mpg and CO2 emissions of 65g/km.

Audi A8 insurance groups have yet to be confirmed. However, it seems unlikely that they'll fall far below the ratings of the outgoing A8. This starts in group 46 for the 3.0-litre diesel, increasing to 49 for all other models.

However, it could be that standard crash-mitigation equipment offered by the latest A8 will be seen as reducing risk, bringing group ratings down a little. We suggest you obtain a quote for cover before you make a decision to buy.

Audi cars are maintained according to a choice of fixed or flexible service schedules. Fixed is intended for those who cover less than 10,000 miles a year or who make mainly short urban journeys. Under this scheme, a car requires an oil-change service every year or 9,000 miles and an inspection service every two years or 19,000 miles.

Those who cover in excess of 10,000 miles a year are advised to follow the flexible schedule, under which an oil service is performed every two years or 19,000 miles (whichever comes first), with an inspection service set at the same interval as with the fixed schedule.

In order to keep abreast of maintenance, it's a good idea for A8 owners to take advantage of one of Audi's service pre-paid plans.

The Audi A8 is covered by the same three-year warranty as other Audi models. This has no mileage limit in the first two years, but a 60,000-mile ceiling comes into effect for year three. You can extend the warranty to four years/75,000 miles or five years/90,000 miles for an extra charge.