The Audi A8 isn't intended to offer the last word in driving excitement, but luxury cars like this still need to blend comfort and quietness with an enjoyable experience from behind the wheel. The early production cars we've tried so far appear to have judged the balance quite nicely.

The A8 is a heavy car, but still feels maneuverable thanks in part to a four-wheel steering system. This turns the rear wheels in the opposite direction to the front wheels when driving at low speeds, reducing the A8's turning circle for greater agility – particularly noticeable on tight urban streets. It's fair to air the old cliche of the car shrinking around you, and the sensation is very similar to that delivered by the Audi A4 until the A8's greater weight and width becomes apparent at higher speeds. Powerful brakes reassure you that all the bulk will be kept in check, though, and they stand up to repeated strong applications without showing signs of fade. 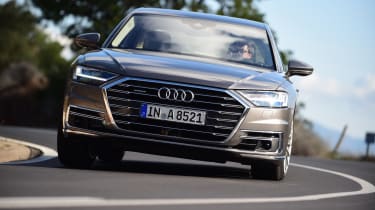 Compared to the uncannily soft ride of an S-Class, the A8 has a very slightly firm edge, though not one that you could ever call obtrusive. This slight cloud comes with the silver lining of impressive body control, with very little body lean even during the enthusiastic hard cornering that the A8 can cope with. Such exuberance is encouraged by accurate steering with a nice weight to it, confirming that Audi definitely hasn't overlooked driver appeal.

A 3.0-litre diesel engine has always been a popular choice in the Audi A8 and in the latest offering doesn't seem likely to change that. The 50 TDI produces 282bhp and loads of pulling power from the moment you put your foot down. It can take the hefty saloon from 0-62mph in 5.9 seconds, with seamless gearchanges from an eight-speed automatic gearbox.

Similarly unobtrusive is the mild-hybrid system that all A8s feature. Utilising the A8's 48-volt electrical system, it employs a starter-generator in the engine compartment that allows the engine to be turned off when the car is coasting along, as well as at a standstill – such as waiting at traffic lights. The moment power is called upon, the engine restarts without hesitation, making the experience fairly natural in feel.

A more powerful diesel engine will join the range towards the end of the year, using the same 429bhp 4.0-litre V8 found in the Audi SQ8 SUV. 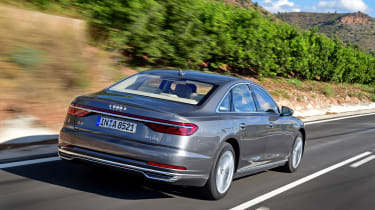 Only one petrol engine is offered in the standard A8 line-up, the mysteriously named 55 TFSI that's in fact a 3.0-litre V6 developing 335bhp. It's extremely quiet even when pushed hard, emitting a polite growl when full power is called for. If luxury appears above economy on your list of priorities, then choose this engine over the diesel. The 0-62mph sprint is dispatched in 5.6 seconds, and – as with the 3.0-litre diesel – the eight-speed automatic gearbox changes gear so smoothly you don't notice it happening.

Alongside the petrol and diesel Audi A8 engines, both of which use mild-hybrid technology, the 60 TFSIe plug-in hybrid is the only A8 that offers pure-electric silent running. It combines a 3.0-litre V6 TFSI petrol engine with a lithium-ion battery and 134bhp electric motor for greater fuel efficiency and a maximum output of 443bhp. Power is fed to the quattro all-wheel-drive system via an eight-speed gearbox. The car takes 4.9 seconds to get from 0-62mph and goes on to a limited top speed of 155mph.

The powertrain’s performance is considerable, with effortless overtaking and acceleration thanks to the combined power of the petrol engine and electric motor. At slower speeds is where the 60 TFSIe really excels, with the near silent electric running making it relaxed and refined.

While the transition between electric and hybrid power is mostly smooth and refined, the petrol engine switching on does make a noticeable V6 thrum from the front of the car, and gear changes can be a little noisy when accelerating hard from a standstill if you’re relying solely on the petrol engine.