The first impression as you sit behind the wheel of the A8 is one of silence. To close the door behind you is to shut the world firmly outside, and that quietness continues at moderate speeds. However, speed up to motorway pace and the Audi's wide tyres kick up quite a roar from the road surface.

For absolute quietness the Mercedes S-Class still reigns supreme in the luxury saloon class and, while the latest A8 is the smoothest yet, the potholes we encounter all too frequently on British motorways aren't as well disguised by the Audi as its Mercedes rival. Many will feel its extra stability in corners makes up for this, though – its reluctance to lean means you stay comfortable in your seat during even the most energetic maneuvers. 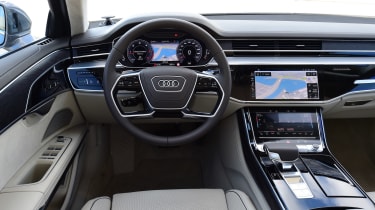 The A8 has easily the most visually impressive dashboard to grace an Audi to date. Its main body, faced in a lustrous black gloss in the car we drove at launch, incorporates a 10.1-inch central touchscreen through which the car's wealth of infotainment and convenience features are controlled. Audi’s Smartphone Interface is standard across the A8 range, and includes Apple CarPlay and Android Auto connectivity.

Below that, a second 8.6-inch screen offers control of less commonly accessed features such as the climate-control and can serve as a pad for inputting written commands.

More reviews for A8 saloon

The system felt relatively intuitive, despite its obvious complexity. User-friendliness is enhanced by large 'virtual buttons' and the provision of haptic feedback to confirm your inputs, although it does require quite a firm prod to work. You can also use 'pinch-and-swipe' gestures that'll be familiar to anyone with a smartphone. Our only criticism is that it can be hard to judge how much pressure to apply to the screen before a gesture is recognised, but you soon get used to it. It all feels like a logical and worthwhile progression from the rotary MMI controller of previous Audi models – regularly used features are easy to find at a glance, minimising the time your eyes spend away from the road ahead. 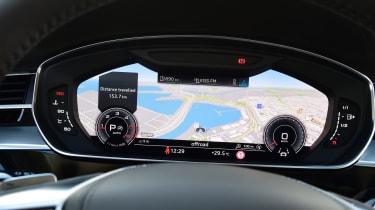 The same is true of the Virtual Cockpit Display immediately ahead of the driver. We've seen this before in many Audi models, but this latest version impresses with its crisp presentation. As before, when map information is displayed, it's on a grand scale that makes it easy to interpret without concentrating unduly hard and can be used with minimal distraction from driving.

Audi has given its flagship a fittingly comprehensive list of standard equipment, including the Virtual Cockpit mentioned above as well as a high-definition head-up display. Internet-based Audi Connect services are available and these link to the navigation system for destination information. There's also Audi's 'phonebox' wireless charging system. LED lights are standard front and rear, as are auto-dipping headlights. The range of driver-assistance aids offered is lengthy and includes adaptive cruise control and lane-departure warning. The seats are faced in leather and those at the front are power-adjustable as well as heated and ventilated.

Rear-seat occupants are extremely well catered for, especially whoever sits in the left-hand seat of the long-wheelbase A8 L. Here, an optional 'relaxation seat' can be specified, with four separate ranges of power-adjustment. There's also a footrest built into the back of the front seat that can massage and warm the passenger's weary feet. All A8 L models benefit from standard equipment that's optional on other versions. Sunblinds for the rear side windows and rear screen are provided, as is adjustable mood lighting, controlled by a tablet-like remote that also commands the rear compartment's climate control and seat heating and massage functions.

Many of the A8's most exciting equipment remains locked away until legislation allows its use on British roads. Gradually, updates will be rolled out to enable 'level 3' autonomous features such as traffic jam pilot, which can brake, accelerate and steer at speeds of up to 37.3mph without driver input. Parking pilot and garage pilot – features that enable the car to drive itself to an overnight parking spot after you've stepped out after your journey – will also be enabled in due course.

The 'relaxation seat' mentioned above isn't the only optional A8 feature that promises enhanced luxury. The full options list has yet to be published, but Audi promises an active suspension system that uses camera footage of the road ahead to pre-warn the suspension of oncoming road imperfections, effectively smoothing out the road.

A powerful Bang & Olufsen stereo is also available, delivering 1,920 watts of power through a total of 23 speakers and providing 3D surround sound.