It might not look like it, but the Audi Q5 sits on the same mechanical platform as the Audi A4 saloon, and features a similar roster of protective technology. Reliability appears reasonable, although Audi needs to do more to impress customers according to the latest feedback.

Audi’s cars generally feel rock-solid inside, but that hasn’t always translated to strong customer satisfaction. Audi as a brand finished in 21st place overall out of 30 brands in our 2020 Driver Power results, which isn't too encouraging, but does put it ahead of rivals BMW (27th) and Mercedes (28th). The Q5 itself came 46th out of the top 75 models, with 24% of owners reporting first-year issues, from sat-nav problems to rattling trim.

Interestingly, Skoda – another Volkswagen Group brand – came fifth out of 30 carmakers. Considering Volkswagens, Skodas and Audis often share mechanical components, it may be a case of Audis not quite meeting buyers’ expectations, rather than them being unreliable per se. 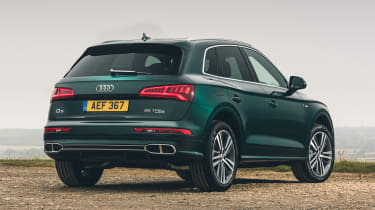 The standard autonomous emergency braking system in the Q5 is only designed to work at up to 52mph, but research indicates 75% of all collisions occur under 25mph, and the Q5’s setup can detect pedestrians as well as larger obstacles.

If you want more safety kit, it’s time to head over to the options list. Super-bright ‘matrix’ LED lights are to be found here, and it’s also possible to specify a lane-departure warning system, a self-parking feature and adaptive cruise control.