Predictable as it may be to say it, the interior of the Audi Q5 is a triumph of clear design and luxurious appointment – with one exception

Although updated in 2012, the old Audi Q5 had been in production since 2008. Despite being relatively long in the tooth, its interior stood the test of time well. It’s thus no surprise to learn that the latest Q5 builds on this successful formula of a clear layout, an elegant design and a sophisticated sense of build quality. There’s only one complaint about the new Q5’s dashboard.

Let's get the one bit of bad news out of the way first: the Q5’s standard seven-inch infotainment display sits (or ‘floats’, as Audi would have it) on top of the dashboard, and looks like something an enthusiastic yet inexperienced DIYer might have installed over a weekend.

We know why Audi’s done it: at this height, the screen is ideally placed in your line of sight – but in the A3 the screen drops and rises vertically from the top of the dashboard. Audi claims most A3 drivers leave the screen up all the time, but we smell cost cutting, as the larger Q7’s screen drops down discreetly when not in use. In fairness, Audi isn’t alone in perching its screen atop the dash – Mercedes also does it with some models – but it’s a trend we hope is short-lived. 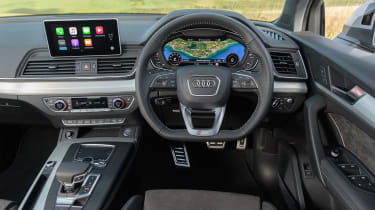 Everything else about the interior is excellent. The Q5 takes its interior design cues from the larger Q7 SUV, so you get a chunky gear selector for the automatic gearbox, beautifully designed and easy-to-use air-conditioning knobs and the sense someone thought long and hard about what people want in their cars. Audi is claiming class-leading aerodynamics for the Q5, so expect wind noise to be much reduced from the previous car, which was pretty hushed to start with.

All Q5s come with a power-opening boot, Audi’s ‘Drive Selector’ with five modes for the gearbox and engine and the above-mentioned infotainment screen, which grows to 8.3 inches if you choose to upgrade it. We advise you do this (in for a penny, in for a pound, after all) as you’ll also get a touchpad complete with handwriting recognition and haptic feedback, which vibrates when making selections for easy eyes-free operation.

The Sport trim is the starting point for the range, with a racey exterior design, LED ambient lighting, sat nav, Apple Carplay and Android Auto, and sports front seats, while S line brings 19-inch alloy wheels, LED headlights, leather and Alcantara seats, brushed-aluminium trim inserts, a black headlining and a sporty makeover inside and out. 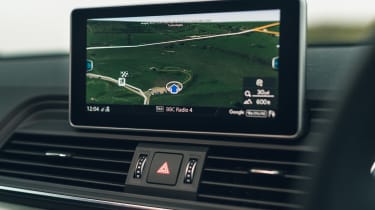 As well as interior design, Audi also does options very well and boy, does the Q5 get plenty. You want ambient lighting with 30 different colours? Tick the box. Audi’s digital ‘Virtual Cockpit’ dashboard dials? Tick the box. A Bang & Olufsen stereo, tablet computers for the rear seats, a head-up display, adjustable suspension or a hands-free foot-operated sensor for the boot? You know what to do. One particularly worthwhile addition is the adaptive air suspension, which soaks up all but the very worst in road imperfections - if you'll be doing long journeys and want the best in comfort and serenity, it's worth the money, and puts Q5 ride quality above that of rivals such as the Jaguar F-Pace.