Making a tall SUV like the Audi Q5 drive like a normal hatchback or saloon car usually means fitting stiff suspension, as doing so minimises the extra body lean the additional height and weight would otherwise provoke when cornering.

The previous version of the Audi Q5 is an excellent example of this – although it was easy and predictable to drive, it could be genuinely uncomfortable over bumps; the unforgivingly hard suspension transmitted imperfections in the road surface through to the cabin with alarming clarity. The latest Q5, though, is fast, easy to drive and – crucially – absorbs pitted tarmac effectively yet barely leans when cornering. This is even more the case if you go for the optional adaptive air suspension.

The Q5’s steering is accurate enough and makes the car easy to place on the road, but it gives you little information about what the front wheels are doing or how much grip they have. We found selecting ‘Dynamic’ mode on Audi’s Drive Mode Selector sharpened up its responses somewhat, but it also makes the ride too firm. Currently, every Q5 comes with a dual-clutch automatic gearbox and a four-wheel-drive system that disengages the rear wheels when cruising to save fuel. 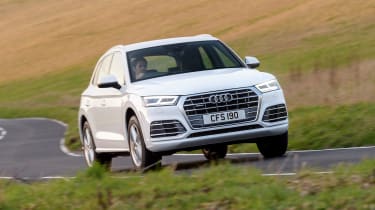 Enthusiasts will favour the SQ5, reviewed separately, which has a lower ride height than the standard Q5, sportier handling and loads of grip. It still manages to be refined and comfortable.

As was the case with the previous Q5, if you’re after an SUV of this size and driver involvement is important to you, the BMW X3 and Jaguar F-Pace both feel more dynamic in corners.

The Q5 was launched with a 2.0-litre diesel or petrol engine, followed by 3.0-litre versions

The 2.0-litre petrol engine offered with the Q5 is a peach. We’re familiar with Audi’s 242bhp 2.0-litre 45 TFSI engine from the A4 and other models and – assuming it exhibits the same characteristics in the Q5 – you should expect it to be eager to rev, smooth to use and propel the car forward with urgent momentum. This engine takes 6.3 seconds to accelerate the Audi A6 from 0-62mph. 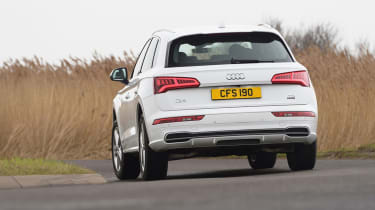 Nice as the petrol may be, it'll cost high-mileage drivers more to run than the more fuel-efficient diesel. Like the petrol, the diesel is familiar Audi fare and that’s no bad thing. The 187bhp 2.0-litre is punchy enough and gets the Q5 from 0-62mph in 7.9 seconds. Add a further one to three seconds to that time for the 161 and 148bhp 2.0-litre diesels, which are expected later on.

There are two versions of the plug-in hybrid, badged 50 TFSI e and 55 TFSI e, with a combined power output of 295bhp and 362bhp respectively. The 55 TFSI e feels smooth to drive in EV mode, with enough power to cruise at motorway speeds, even if high speeds will drain the battery more quickly. Hybrid mode uses the navigation to work out when best to use each power source for the most efficiency, and the changes between them are almost imperceptible.

Straight-line performance isn't far behind the Audi SQ5, but while neat and composed in corners, the 55 TFSI e doesn't encourage you to push harder like the performance model. Instead, its powertrain and compliant suspension suit a more relaxed driving style.