The latest Audi Q5 is lighter than the previous model, yet it’s also larger and more practical

The heavier a car is, the more fuel it uses, so the latest Audi Q5 has been on a bit of a diet, with Audi claiming up to 90kg of weight loss from the previous car. That might not sound like much, but it’s the equivalent of removing a largish adult from Q5, while actually improving the interior space on offer. 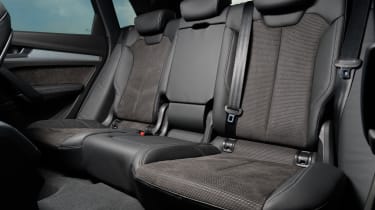 We’ve said it before, but it bears repeating: whoever designed the Q5’s interior really thought about how people use their cars. There’s a long, narrow and useful slot by the gearlever for storing your mobile without it sliding about (and another if you have a wirelessly-chargeable phone), generously-proportioned doorbins, a large glovebox and simple ergonomic touches that just make life easier.

Want to change the stereo volume or turn it off quickly? Sure, you can use the controls on the standard multifunction steering wheel, but there’s a knob by your left hand next to the gearlever that falls to hand perfectly. It’s seemingly simple touches like this Audi does better than anyone else.

Front-seat occupants get – as you might expect – a good amount of space, as do those in the rear, although the Q5’s four-wheel-drive mechanicals mean there’s a very pronounced transmission tunnel hump in the rear floor, which forces any middle-seat passenger to splay their legs. This is a common problem with 4x4 cars, though.

The three individually folding rear seats are easy to drop and lie reasonably flat, leaving you a level (and large, at 1,550 litres) boot floor. 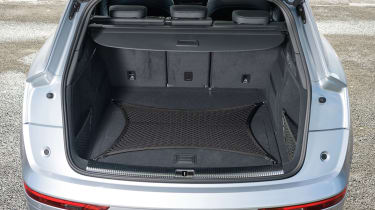 It may be only 10 litres bigger than the old model’s, but the latest Q5’s boot is big at 550-610 litres, depending on how far forwards or back you’ve slid the rear seats. There’s not much of a load lip to hoik things over, while the boot aperture is a good, square shape. Choose a PHEV and there's a 95-litre reduction in boot space, cutting it to 450 litres and making it impossible to fit a space-saver tyre. There's also a bulky cable carrier that sits inside the boot, taking up room, but we imagine most drivers will leave this in their garage unless planning to top-up the batteries while out.

Being an SUV inevitably means you have to lift items a little to get them into the Q5, but choose the optional adjustable suspension and the rear of the car drops when opening the boot, solving this problem in a neat, if expensive way.

The Q5 is a capable tow car, able to haul a braked trailer weighing up to 2,400kg with all engines currently on offer. The Mercedes GLC can tow slightly more (2,500kg), but the Q5 can actually tow 400kg more than the Land Rover Discovery Sport, which may come as a surprise. The Audi Q5 50 TFSI e can tow slightly less, at 1,750kg.