It’ll come as little surprise that too few people bought an Audi R8 for it to have featured in our Driver Power customer satisfaction survey. Similarly, the R8 hasn’t been put through the rigours of Euro NCAP’s crash-testing, but you can reasonably assume Audi has used it’s vast engineering and motorsport expertise to make its flagship supercar as safe as can be.

Audi as a brand had a relatively unimpressive year in our Driver Power poll, coming 21st out of 30 manufacturers in 2020, although this did put it ahead of German rivals BMW and Mercedes. The R8 certainly feels well built and robust inside and, given the amount of money ownership requires, you should expect nothing but the best service from your Audi dealer.

This R8 shares mechanical parts with the Lamborghini Huracan, it benefits from the experience of two established carmakers. Some of the interior technology, like the Virtual Cockpit, has already appeared in other Audi models. 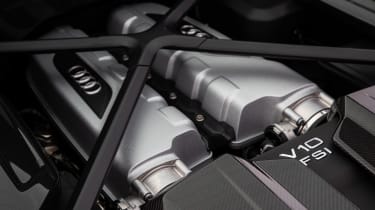 The R8’s strong body shell should protect occupants in a serious crash, while the usual suite of airbags, traction control and electronic stability control means the car should be very safe. The quattro four-wheel-drive system fitted to the core models in the range provides excellent grip in sharp corners, which should help even novice drivers out of the odd sticky situation.

Audi has also been thoughtful enough to put ISOFIX child-seat anchor points into the front passenger seat. You’ll have to deactivate the passenger airbag if you want to use a rear-facing child seat (and note the optional bucket seats don’t come with ISOFIX), but it would be technically possible to bring a new baby home from hospital in the R8 – assuming one parent is happy to take a taxi.