There are some storage spaces in the cabin, but the Audi R8 has a small boot

It’s not really fair to compare the Audi R8 to more sensible cars like the Skoda Octavia Estate, and we’ve got to give some marks to Audi for making a two-door supercar even slightly practical; especially when, because it’s mid-engined, there’s no space at the back for a boot. 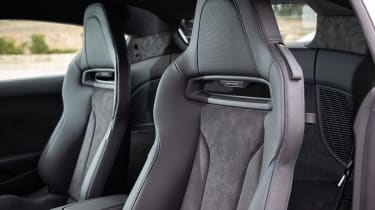 You don’t buy a £100,000+ supercar for its practicality, but compared to the Porsche 911, for instance, the Audi comes off somewhat poorly. Since it’s strictly a two-seater, there’s no room behind the standard R8 or R8 Performance’ seats, while the 911 has token rear seats that double up as a space in which to throw weekend bags or shopping.

Audi has made some concessions, though: while there’s not much space behind the seats in the standard models, there is a small shelf that'll take a couple of jackets. There are also a few generous cubbies in the centre console and some door bins.

As one of the cheapest options on the R8’s extras list, the £250 Storage Pack is probably a box worth ticking. This adds a net to the shelf behind the seats and also puts nets on the side of the front boot. While £250 might sound like a lot for some elasticated webbing, convenience rarely comes cheap with mid-engined supercars. 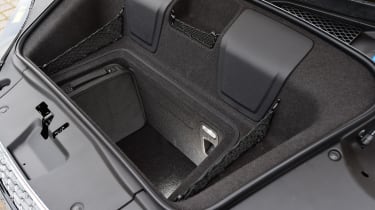 The 112-litre boot is located in the nose of the car, but it’s not exactly generous. There’s enough space for a pair of small weekend bags, but little else. The space itself is quite deep, but its narrow opening and shape limits the items you can actually put in it. Still, at least there’s a boot, and you and a passenger may well consider having to pack light a small price to pay to sample the R8’s many talents. For comparison, a Porsche 911 with four-wheel drive has a 132-litre 'frunk' under its bonnet so it’s a fair effort from Audi.