No matter which way you look at it, the R8 won’t be cheap to run. Its enormous 5.2-litre V10 petrol engine is a technical masterpiece, but fuel, servicing and insurance costs all – like the car itself – require deep pockets. 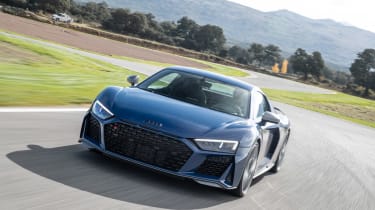 Although the first-generation Audi R8 was available with a smaller 4.2-litre V8 petrol engine, the current car’s 5.2-litre V10 actually represents an improvement in fuel economy. That’s not to say it’s particularly frugal, though: all versions of the R8 officially return between 21-22mpg with CO2 emissions ranging from 288g/km up to 301g/km. The R8 costs £475 a year to tax during years two to six of ownership, as they cost more than £40,000 to buy. Road tax falls to £150 a year after this period.

Again, it should come as no surprise that as a 205mph supercar, the Audi R8 sits in group 50 out of 50. Expect four-figure premiums and a hefty excess.

Just because you’re spending the equivalent of a small house on a car, don’t expect preferential warranty conditions: the R8 gets the same three-year/60,000-mile warranty all other Audis come with. Given the amount most supercars are driven, the time period will probably elapse long before the mileage limit is reached.