Like many cabriolets, the BMW 2 Series convertible has limited boot and rear-seat space

The BMW 2 Series is reasonably practical as a two-door coupe, but unsurprisingly the convertible version tested here isn't quite as impressive in this regard. Rear-seat passengers in particular have to make do with less room than they get in the coupe.

Space up front is unchanged from the coupe, so even taller adults will be comfortable and there are plenty of storage cubbyholes. These include decently sized door pockets, a big glovebox and a centre-console storage area with two drinks holders.

In the back, it's a different story, as making room for the roof mechanism has led to the rear seats being pushed forward a bit compared to the coupe. Legroom suffers as a result, so the back seats in the convertible are only really suitable for children – and even they will have a hard time getting in and out of there. Shoulder room in the back is also limited by the shape of the bodywork. 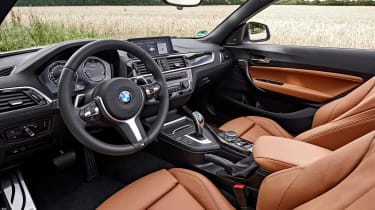 It's also worth noting that putting the optional plastic wind deflector in place means you can no longer access the rear seats, so you need to choose between reduced buffeting at speed and the ability to carry two more passengers – you can't have both.

While boot space in the 2 Series coupe is a generous 390 litres, it drops to 335 litres in the convertible – and you can only use 280 litres of that if you want to put the roof down. The convertible's boot is also more awkwardly shaped than the coupe's, making it harder to make use of the total luggage capacity. 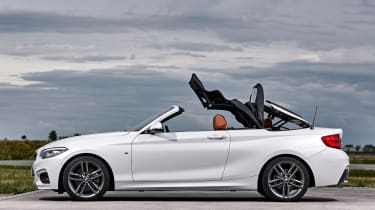 There's an awkward hump underneath the roof, which makes it really difficult to load anything but squashy bags. When roof is up, you have to move it out of the way. The resulting space is better but still not great. On the upside, there's a net for securing smaller items in place.

The 2 Series convertible has the same towing limits as the 2 Series coupe, so the BMW 220d can manage a 1,500kg braked trailer, while the BMW 220i and BMW 228i can pull 1,200kg. The arrangement of the M240i's exhaust pipes means it's not possible to fit a tow bar to this version, however.