All BMW 2 Series convertible engines are strong and smooth performers, and handling is great, too

Simply put, the BMW 2 Series is great to drive – certainly more entertaining than its chief rivals in the upmarket cabriolet class, the Volkswagen Golf Cabriolet and Audi A3 Cabriolet. All models handle well, but the M Sport trim level and M240i come with adjustable suspension that allows you to tweak the car's setup to suit the road conditions. 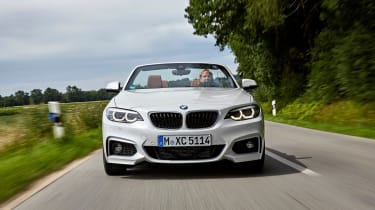 The 2 Series Convertible also boasts extra body strengthening to make up for its lack of a metal roof. This gives the car a strong, solid feel, with barely a hint of the wobbles and vibrations that can affect some cabriolets. The steering is nicely weighted and really lets you know what the front tyres are doing, while there’s plenty of grip and a nice balance to the handling.

The BMW 2 Series convertible range kicks off with the BMW 218i petrol model. Compared to much of the rest of the range, it’s missing the power and performance befitting such an apparently sporty car. It gives you 134bhp and a 0-62mph time a long way north of nine seconds.

The BMW 230i offers a decent hike in power (for a total of 248bhp), bringing the 0-62mph time down to 6.1 seconds (or 5.9 seconds in the automatic) and increasing the car's top speed to an electronically limited 155mph. 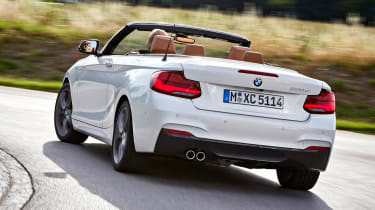 But if it's performance you really want, we think it's well worth spending the extra £6,000 or so to get the range-topping petrol model, the 335bhp BMW M240i, which has a storming 4.9-second 0-62mph time (4.7 with the automatic gearbox) and suspension tweaks to improve the handling. As well as there being more power – the previous M235i had ‘just’ 321bhp – the engine’s output is spread more evenly throughout the rev range, too.

The M240i’s six-cylinder engine is unusually large for a car in this class, but although fuel economy isn't the best, we think the sacrifice is worth it. The extra weight of the convertible blunts performance (very) slightly compared to the BMW M140i hatchback and BMW M240i coupe, but it's still very quick and sounds great – especially with the roof down. Both the manual and eight-speed automatic gearboxes are excellent, too, while the 240i is also much more fun to drive than its biggest rival: the fast but rather lifeless Audi S3.

There are three 2.0-litre four-cylinder diesel engines on offer in the 2 Series Convertible. At the bottom of the range is the 148bhp 218d. This manages 0-62mph in less than nine seconds and is pretty economical, managing more than 60mpg regardless of which gearbox you go for.

Next up is the BMW 220d. This 187bhp version offers eager performance (matching the 220i petrol's acceleration) combined with very frugal 64.2mpg fuel economy if you go for an automatic gearbox (with a six-speed manual, that figure drops to 60.1mpg). The 220d is expected to be the top-selling version, and it's not hard to see why. You can also specify the 187bhp diesel engine with xDrive four-wheel drive, which gives more grip and security in slippery conditions.

At the top of the 2 Series convertible diesel range is the BMW 225d. This is only available in M Sport trim and manages an impressive 221bhp from a turbocharged 2.0-litre four-cylinder engine. It'll do 0-62mph in just 6.4 seconds and tops out at 146mph. This version is only available with the eight-speed automatic gearbox.