Build quality, materials and layout of the BMW 5 Series Touring are all excellent 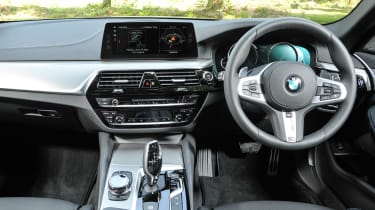 Like many modern upmarket cars, the 5 Series Touring has its infotainment screen sitting permanently atop the dashboard – it doesn’t retract. As with the display found in the latest E-Class, however, it’s well integrated into the overall design and doesn’t spoil the aesthetics of the 5 Series’ interior.

All 5 Series Touring models come with BMW’s iDrive infotainment system and it remains one of the best on the market. The 12.3-inch main screen is very clear and can now be operated like the touchscreen of a smartphone. A character recognition system has been incorporated into the rotary wheel controller, allowing you to sketch the shape of a letter on the pad when entering words or postcodes rather than scrolling through and hopping between letters, which can get tedious.

A ‘Gesture Control’ feature is a £160 optional extra and gives you another way of controlling the infotainment system without using the rotary controller. If, for example, someone calls you and your mobile is linked to the system, you can gesture to accept or reject rather than pressing buttons. It’s a nice idea, but feels a bit gimmicky and given the long list of other options, we’d recommend putting your money elsewhere.

The 5 Series Touring is available in two trims, called SE and M Sport. The entry-level car is the SE, but it still comes with more standard equipment than a lot of top-spec cars. The SE gets sat nav, a DAB radio, heated leather seats and cruise control. 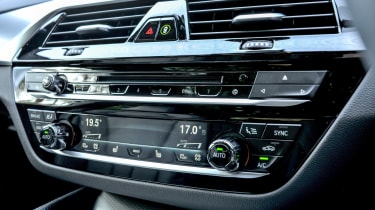 BMW’s Display Key allows you to set the car’s air-conditioning to come on in advance. It’ll also show economy figures and servicing information on its small colour screen. There's also a remote-control parking function operated by the Display Key – although you'll need to order the Parking Assistant Plus for this.

Like all manufacturers of ‘upmarket’ cars, BMW offers customers a lot of options and it’s easy to make the car considerably more expensive than its list price if you’re not careful.

The equipment packages range from around £2,500 to almost £5,000. The Technology Package includes a wi-fi hotspot, a head-up display, wireless phone charging, gesture control, a harman/kardon stereo, all the parking packages and a drive recorder.

The Comfort Package gets you a heated steering wheel, keyless entry and extra storage options, while the Comfort Plus pack adds all this plus front and rear seat heating, massage seats, ventilated seats and four-zone climate control. The Entertainment Pack adds a TV function and rear seat screens.

Active cruise control is a system that can look after acceleration as well as braking to a standstill if necessary – it’ll even assist with steering to keep you safely in lane. Another useful driver aid is Parking Assistant Plus, which uses a team of cameras to provide an all-round view of the car as seen from above, helping you to squeeze in and out of parking spaces.