BMW has a reputation for producing excellent drivers’ cars and many buyers looking at the 5 Series Touring will be hoping for a practical family car that’s also good fun on the open road. Fortunately, while the 5 Series does feel bigger than ever, the weight reduction that has aided economy has also helped it retain an agile feel. Driving the 5 Series Touring on twisty country roads shows how capable it is in corners, with minimal body roll and direct steering.

Where the 5 Series Tourer really impresses is in giving this impressive sense of control without compromising ride quality. Even when big 18-inch alloy wheels are fitted, potholes are shrugged off without sending shockwaves through the car's structure. The ride is well judged, ironing bumps out of the road without giving rise to nausea-inducing floatiness. 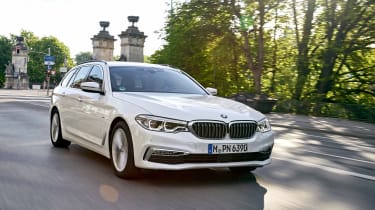 The 520d has a four-cylinder 2.0-litre diesel engine that produces 187bhp and it can get from 0-62mph in 7.8 seconds. The more powerful 530d, meanwhile, has a six-cylinder 3.0-litre diesel with 261bhp and around 50% more pulling power than the 520d. While the extra punch is noticeable and enjoyable, it’s hard to justify spending the extra £8,000 when the 520d is so accomplished and sufficiently quick in its own right.

Two four-cylinder 2.0-litre petrol engines are offered, along with a more powerful six-cylinder 3.0-litre model. The four-cylinder cars, the 520i and 530i, produce 181 and 248bhp respectively, while the 540i develops 335bhp.

The 5 Series Touring comes with a slick eight-speed automatic gearbox as standard and the ability to switch between three driving modes comprising Comfort, Eco Pro and Sport, which adjust the suspension (if the optional adaptive dampers are fitted), gearbox and steering to match how you want the car to behave. BMW’s four-wheel drive xDrive system is also available on the higher-spec models.