The saloon version of the BMW 5 Series was awarded five stars in Euro NCAP crash-testing shares the same sophisticated safety features as the Touring model. As the 5 Series Touring is so new, there isn’t any concrete information on reliability yet, but the performance of old 5 Series models in previous annual Driver Power surveys is reassuring.

BMW came 21st out of 26 manufacturers in our 2018 Driver Power poll, behind Mercedes (20th position) and Audi (18th), demonstrating that the ‘premium’ German brands have considerable room for improvement. The 5 Series itself finished in 21st place out of 75 cars in the best cars to own category, demonstrating that 5 Series owners are generally positive about the model. 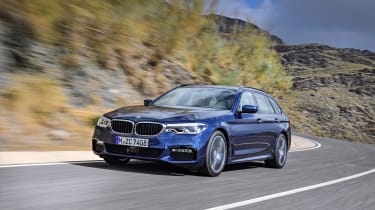 When the new 5 Series saloon underwent crash safety testing by independent experts Euro NCAP, it was awarded a five-star rating, with an excellent adult occupancy safety score of 91%. An 85% score was given for the way child occupants were protected. The organisation was also impressed by the effectiveness of the car’s autonomous emergency braking system.

This is part of a £900 Driving Assistant pack, which also includes a lane-departure warning system and rear cross-traffic alert, which functions to prevent a collision during reversing manoeuvres. Spending a further £1,300 or so turns this kit into the Driving Assistant Plus, which adds features like adaptive cruise control for semi-autonomous driving.