The BMW 5 Series Touring has plenty of space for both front and rear passengers and boot space is improved compared to the old model. SUVs and crossovers are encroaching on the traditional estate’s turf, but the 5 Series Touring remains a very practical, spacious family car.

BMW’s claim that there’s room for three child seats across the rear bench of the 5 Series Touring is a testament to how spacious the back of the car is. While the requisite Isofix mounts may only be installed on the two outer rear seats, legroom and headroom is plentiful for adults and the seats fold in a 40:20:40 configuration. 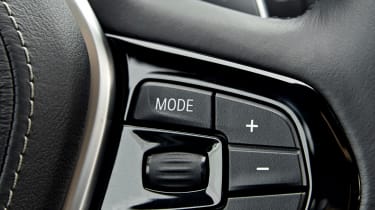 The rear window in the tailgate can be opened so you can put items in the boot without fully raising the bootlid.

With the rear seats in place, boot capacity stands at 570 litres and folding them flat reveals a maximum of 1,700 litres. This is slightly down on the class-leading E-Class Estate, with its 640/1,820 litres, but it’s still a very large and useful boot regardless. The opening is wide and the boot floor is flat, so loading awkward items is made easier.

The slight increase in space over the old 5 Series Touring has been trumped by the improved load limit, which has gone up from 120kg to 750kg thanks, in part, to the air-suspension at the rear, which comes with a self-levelling feature.

The 5 Series Touring has the increasingly prevalent feature that allows you to waggle your foot under the rear bumper to open the boot if you have the car key in your pocket.

All models in the BMW 5 Series Touring line-up have a towing capacity of 2,000kg. The 5 Series is an accomplished tow car, with the 520d xDrive model taking top spot in the 2018 Camping and Caravanning Club’s tow car awards. An electronically folding tow bar is available as a £855 option.