The latest BMW 5 Series Touring is lighter than its predecessor, which improves economy 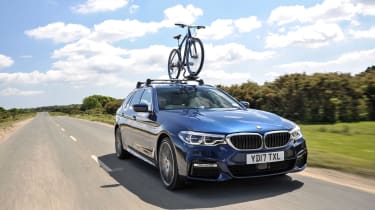 Most 5 Series Tourings sold will have the smallest diesel engine under the bonnet, showing that customers do retain an interest in economy as well as overall price and performance.

While some small fuel-efficiency gains have been made via a Start/Stop function and an active radiator grille that closes for improved aerodynamics when maximum cooling isn’t required, the biggest aid to economy is the use of aluminium and aluminium alloys in the car’s construction. This has made the latest 5 Series Touring up to 100kg lighter compared to the old one.

The 520d is the most popular version of the 5 Series Touring. Its 187bhp four-cylinder 2.0-litre diesel is quite economical, capable of 55.4mpg and CO2 emissions of 134g/km. This puts the car in the 29% Benefit-in-Kind (BiK) rating for company-car drivers, virtually identical to its most direct rival, the 191bhp version of the Mercedes E-Class Estate E 220d.

A six-cylinder 530d xDrive is also available, and while its 47.9mpg might not look so impressive it's worth remembering this diesel estate is capable of dispatching 0-62mph in less than six seconds. Its emissions start at 153g/km resulting in a 33% BiK rating.

The petrol choices aren't as economical, but will suit buyers who frequently make short journeys, as well as fans of the traditional BMW petrol engine. The entry-level 520i returns up to 42.2mpg in mixed driving with CO2 emissions of 152g/km for a high BiK rate . The six-cylinder 540i emits 179g/km and returns 35.8mpg hitting the top BiK rate for company-car drivers.

The 5 Series Touring models closely match the insurance ratings of their saloon equivalents. The 520d and 520i are the cheapest to insure, with group 30 rating for the SE models, rising to 36 for M Sport Edition versions, while 530d models are rated in group 43. The 540i starts in group 41 and the 530e starts in group 40.

New BMWs come with a feature called Condition Based Servicing (CBS), which monitors the condition of your car and alerts you when a service is required. An icon will display on the dashboard and BMW technicians can download information stored on your car key so they can quickly see what’s been detected by the CBS system. 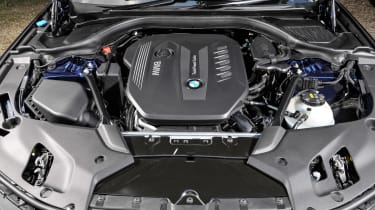 BMW offers a three-year/unlimited-mileage warranty, which is the same as Mercedes and similar to Audi, which limits you to 60,000 miles. It’s a reasonable warranty for one of the ‘premium’ car manufacturers, but is starting to look a little miserly next to the five and seven-year warranties offered by companies like Hyundai and Kia.