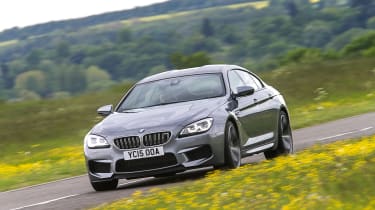 The BMW M6 Gran Coupe is the second most expensive BMW currently on sale and is effectively a showcase of the German manufacturer’s ability to deliver performance, style and luxury in one package.

The styling of the car hints at the performance awaiting the driver, with big air intakes, large, 20-inch alloy wheels, four exhaust pipes and a carbon fibre roof giving the car a sporty look. Inside, a standard Merino leather interior gives the car a sense of occasion and luxury.

Rivals include the Audi RS7, the Porsche Panamera and Mercedes CLS 63 AMG. All these cars are fast, luxurious and expensive. If you’re in a position to buy one, it’s fortunate that the cost of ownership and adding the options you’re likely to want won’t concern you too much, as both are high.

There's no doubt it's an expensive car to own, but fuel economy could be a lot worse

A 4.4-litre twin-turbo V8 petrol engine is the only option for M6 Gran Coupe buyers and its 552bhp means it uses plenty of fuel. Relatively speaking, however, claimed economy of 28.5mpg is not a bad return for a car that’s as fast and as heavy as this car. CO2 emissions of 231g/km put the car in tax band L, which means road tax is a hefty £490. It’s unlikely buyers who can afford the car’s eye-watering price tag will wince too much at this though.

The car sits comfortably in insurance group 50 and replacing tyres, which you’ll need to do fairly often, will be expensive. Fixed-price servicing is available for just under £500 for three years, which takes the sting out of maintaining the car to a certain extent.

The 552bhp produced by the car’s 4.4-litre twin-turbo V8 may not be great for fuel economy but it delivers serious performance, which is what the M6 Gran Coupe is all about. The car can get from 0-62mph in just 4.2 seconds and is so effortlessly and intensely quick that it’s very hard to drive anywhere slowly.

The car’s seven-speed automatic gearbox is a perfect match for the engine’s smooth power delivery, and you can change the speed of the shifts depending on how you’re driving. Similarly, you can alter the throttle response, steering weight and suspension stiffness to make the car more comfortable or more aggressive in nature.

The engine is big and heavy but BMW has managed to prevent this from making the car pitch and roll in corners. The M6 Gran Coupe responds quickly to steering inputs and it turns in impressively for such a big car. The weight of the steering could be feel a bit more natural but it’s much more involving than the rather inert feel of the Audi RS7’s steering.

If 552bhp is insufficient, or you just want the most extreme version of the car available, BMW offers the Competition Pack for £5,500. This takes engine power up to 592bhp and includes firmer suspension to keep the car flatter through corners. It seems rather unnecessary to us given the performance already on offer but some buyers won’t be able to resist. The carbon ceramic brakes are probably a better way of spending extra on the car; at £7,395 they certainly aren’t cheap but they are seriously effective at slowing down such a big, heavy car and they will prove much more resistant to fade if you ever decide to take the M6 Gran Coupe on to a track.

The latest M6 Gran Coupe has an interior finished in Merino leather, which was a £5,000 option before the update in 2015. It gives the inside of the M6 a plush, exclusive feel and feels more fitting for a car that costs almost £100,000.

The dashboard is covered with more soft-touch leather, as well as carbon fibre weave, and electric sports seats come as standard. The M6 Gran Coupe also features BMW’s latest iDrive infotainment screen, plus a head-up display, and a stylish steering wheel inspired by the BMW Z1 from the 1980s. For 2018, BMW also made its 'remote services' standard, making it possible to check where your M6 is and how much fuel is in the tank, flash its headlights and even lock or unlock the doors, all using a smartphone app.

With the car switched to its ‘Comfort’ settings, it becomes a refined long-distance cruiser and passengers are well-insulated from the sound of the wind passing over and around the car. Only the roar from the wide tyres on the car’s big alloy wheels is noise loud enough to be considered intrusive occasionally.

Despite the M6 Gran Coupe's speed, it's just as practical as standard 6 Series

Despite the M6 Gran Coupe’s supercar-esque performance and coupe styling, it is still a five-door 6 Series with all the practicality of the standard car. The distance between the front and rear wheels is greater than it is on the rival RS7, so there is more legroom for passengers in the back and the sloping roofline doesn’t cut into rear headroom too severely.

The M6 loses out to the Audi when it comes the boot, though. The BMW has 460 litres , compared to 535 litres in the Audi RS7, and the 1,235 litres with the seats folded down is smaller than the Audi’s 1,390. The RS7 also has a hatchback style bootlid compared to the BMW’s saloon-style lid, and the former is more practical.

There are a few options available to M6 Gran Coupe buyers that make the car easier to live with on a day-to-day basis too. A reversing monitor is just over £300 and a full 360-degree view of the car’s surroundings is available via a system that costs just over £500. Both make manoeuvering the car, which is pretty big, a lot easier in tight spots.

BMW came in 14th place overall in the 2015 Driver Power satisfaction survey but achieved seventh in the build quality category. The brand generally has a good reputation for reliability too. The car’s engine has been tried and tested in the BMW M5, and many of the other car’s parts have been used before in other BMW models.

Neither the M6 Gran Coupe or the standard 6 Series Gran Coupe have been crash tested by Euro NCAP. We would expect the car to be very safe though, and there is a huge range of optional safety equipment including surround-view, BMW Night Vision with pedestrian recognition, Park Assist, Lane Change Warning System and a Lane Departure Warning System.

Very expensive to buy and options are expensive

The only car that costs more than the M6 Gran Coupe in the entire BMW range is the i8 supercar. So while the M6 Gran Coupe is powerful, stylish and luxurious, it’s also incredibly expensive and it’s very unlikely that buyers won’t want some extras off the options list too. Carbon ceramic brakes are superb but cost almost £8,000 and if you decide you want the even sportier setup of the Competition Pack, you can add another £5,000 to your bill. It’s good to see that luxuries like the Merino leather upholstery have migrated from the optional equipment list to the standard one when the car was last updated, but it would still be very hard to talk about the car representing ‘value for money’.