It’s expensive to buy, but the BMW 6 Series GT may not cost as much to run as you’d imagine

For a large executive car powered mainly by six-cylinder engines, the 6 Series Gran Turismo is not entirely awful on the economy front.

The least powerful diesel is the one to go for if you value economy over all else, with an average figure of 55.3mpg quoted. You won’t sacrifice much in the way of performance; 0-62mph takes a respectable 6.1 seconds. 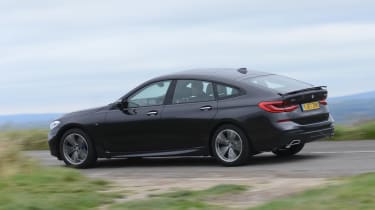 The most powerful option is the 640i, thanks to to its 3.0-litre, 335bhp straight-six petrol engine. With this fitted, the 6 Series GT can reach 62mph from a standstill in 5.3 seconds, but you’ll have to put up with an average of 35.3mpg for the privilege.

Emissions aren't the best, but then the 6 Series is big and heavy car that’s mainly powered by large engines. The worst offender is the 640i, which pumps out 187g/km of CO2, resulting in a year-one road tax bill (usually rolled into the on-the-road price) of £800. After this, you’ll need £310 a year for the next five years on top of the usual £140 flat rate; all 6 Series GT models are subject to this, surcharge applied to cars with a list price above £40,000.

The lowest year-one charge applies to the 630i, which emits a relatively respectable 152g/km, just missing the £200, 131-150g/km tax band and instead qualifying for the £500 first-year payment (this applies to cars with CO2 emissions from 151-171g/km). All 6 GTs are subject to the London Congestion Charge, too.

Thankfully, once you’ve stumped up for fuel and road tax, other expenses shouldn’t be as expensive in relative terms. BMW offers servicing packages that help you to spread the cost across your ownership, with packages adjusted to suit your mileage. Prices start from around £400 for a three-year/36,000-mile package.

The 6 GT benefits from BMW’s standard three-year/unlimited-mileage warranty, but you can also choose to pay for various levels of cover under BMW’s Insured Warranty scheme for extra peace of mind.

The BMW 6 Series GT is a large car with similarly large engines, so insurance isn't likely to be cheap. The entry-level 630i SE sits in group 41, while the top-spec 640i xDrive M Sport is in group 43. The 630d xDrive M Sport diesel is the worst offender, occupying group 44.