One of the main reasons to choose a 6 Series GT over another large BMW is its practicality. It sits somewhere between the 5 and 7 Series saloons in terms of size, yet offers a useful increase in passenger and luggage space over the (already spacious) 5 Series Touring.

There’s the usual array of storage spaces spaces in the cabin, including generous door pockets all round and a large centre armrest compartment. 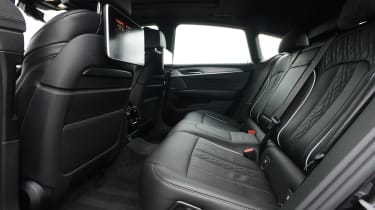 There’s more space in the rear for passengers, too. BMW has done away with the tiered seating of the old 5 Series GT, which sat rear occupants higher than those in the front, giving a better view out and making entry easier. The 6 Series GT instead maximises leg and headroom, with only its roofline causing issues for very tall passengers.

Rather than thinking of the 6 Series GT as a like-for-like alternative to a traditional estate, it’s best thought of as a particularly large, luxurious and spacious grand tourer (hence Gran Turismo) with space for every passenger’s luggage.

While the difference in size isn't dramatic on paper, the boot opening is noticeably larger than in the 5 Series Touring, making loading and unloading that much easier. However, where the 5 Series Touring features a traditionally proportioned, squared-off estate-car load area that lends itself to trips to Ikea or even carrying a dog, the 6 Series GT's large boot is compromised by the sloping roofline.

By way of comparison, the Mercedes E-Class Estate beats both BMWs on this front, with 640 litres of boot space, expanding to 1,820 with the seats folded.

With its plentiful interior space, powerful diesel engines and optional four-wheel drive, the 6 Series GT has all the makings of a fantastic tow car. BMW offers a fully electric towbar as an option, but it’s a pricey extra at around £850.