Climbing inside the BMW i8 is an event in itself. The doors open upwards and outwards, so this really isn’t a car for shrinking violets. Nor is it a car to park in tight parking spaces; you have to open the doors some way before you can even duck out in an ungainly fashion.

That’s not helped by the fact the BMW i8’s dimensions are fairly bulky. It’s both longer and wider than an Audi R8 or Porsche 911. The fairly minimal rear visibility is another problem.

Climbing inside the i8's cabin can be a little difficult compared to a more conventional car, thanks to a low roofline and sizeable sill, which you have to lift your foot over before sliding into the seat. The tricky manoeuvring is worth it, though, because the BMW i8's interior is just as striking as its exterior design. 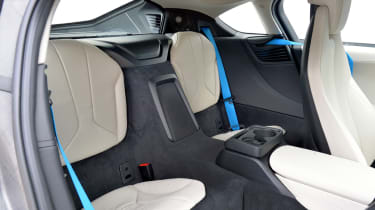 And once you're inside, that low roofline and aerodynamic bodywork mean there's very little wind noise, making the i8 a thoroughly decent motorway cruiser.

Head and legroom for the driver and passenger is fairly good: snug rather than cramped. But those in the back seats won’t fare as well. BMW describes the car as a 2+2, rather than a four-seater - meaning the rear seats are best reserved for occasional use by small children at best.

Given its striking looks, the BMW i8 was never going to be the most practical car on the planet, and it doesn’t compare well to more useable sports cars such as the Porsche 911. 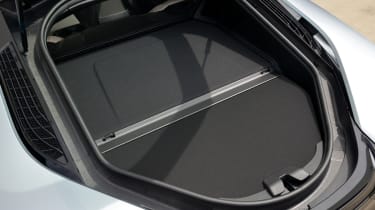 The boot can hold just 154 litres of luggage – much less than you get in a Volkswagen up! city car – although BMW does offer a tailor-made Louis Vuitton luggage set that allows you to make the most of the space on offer. But installing this turns the i8 into a two-seater, as some of the luggage is designed to sit across the back seat.