Sports cars don't come much more economical than the BMW i8

It would be disingenuous to imply that low running costs were central to the appeal of a high-performance plug-in hybrid like the BMW i8. For most people who can afford this car, a reduced fuel bill is simply a happy side-effect.

However, the reduced Benefit-in-Kind (BiK) rating that comes with low 42g/km emissions may appeal to some. It means the i8 sits in the lowest bracket of company-car tax ratings, comparing favourably with the Porsche 911, which sits at the very top of the ratings – many corporate executives will be placed to take advantage of this where a company vehicle is offered as a taxable perk.

The other headline figure for the BMW i8 is its potential fuel economy. Few cars of any type can claim 128.4mpg, let alone cars with the performance the i8 offers. But as with any car, those figures need to be taken in context – the way official fuel consumption figures are calculated takes account of driving under electric power where possible and includes many periods of low-speed driving and acceleration that the i8 can do solely using electric power.

As the i8 has a theoretical electric range of 34 miles at up to 75mph, the petrol engine need not operate at all for much of the measured cycle. In real-life driving, you may experience fewer opportunities to use electric power alone; we averaged 45mpg in mixed driving. This is still a very impressive fuel consumption figure for such a fast car, though.

Essentially, the more low-speed urban motoring you do, the more likely you are to achieve the lofty claimed figure. It’s also vital that you embark on your journey with a fully charged hybrid battery – this takes around three hours using the supplied cable. The i8 has a regenerative braking system that can top the battery up using energy that might otherwise be lost during braking and if the battery does run entirely flat, you can keep driving without electrical assistance – albeit without as much performance at your disposal. 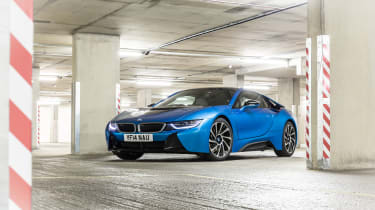 BMW i8 owners should be happy when the time comes to sell, too. The car is expected to retain a bit more of its value than an Audi R8 or Porsche 911 after a few years. But you’ll lose less cash in real terms if you choose the much cheaper Jaguar F-Type.

Although the BMW i8 has running costs on par with a supermini, the same can’t be said of insurance. Given its desirability and vast performance, it falls into group 50 – the highest insurance group.

The BMW i8 is covered by a three-year/unlimited-mileage warranty, like all other BMW models. In addition, the car’s batteries are covered for eight years and up to 100,000 miles, although the nature of the battery means that its capacity will degrade over time. Should the battery lose more than 70% of its capacity, BMW will repair it.

The BMW i8 is also available with an all-inclusive maintenance pack. This takes care of all major and minor services for the first five years of ownership.