The BMW X2 is more responsive and agile than a typical SUV, but it could be more involving

The BMW X2 gets off to a promising start where it comes to driver enjoyment, by using the same mechanical package as the fine-handling X1. It's a tantalising prospect, then, that these tasty ingredients have been spiced up with modified components and a stiffer body in the quest for a sharper, more engaging feel through the controls for the X2.

Enthusiastic drivers will be attracted to the range-topping M Sport, which has firmer suspension and a 10mm lower ride height, and the M35i, with its fiery 302bhp engine. Physics are firmly in the X2's favour, too – with a lower body than the X1, it feels more agile and manoeuvrable from behind the wheel. This is enhanced by a relatively low driving position, which really gives you a feeling of control. 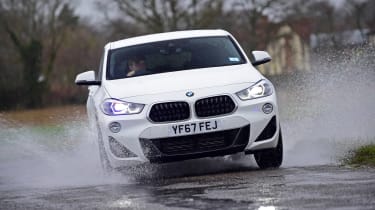 As a result of this sporty setup, the X2 drives more like a sporty hatchback than an SUV and barely leans at all when cornering hard. The steering is direct and response is immediate when you turn the wheel, but despite BMW's efforts, there's no more steering feel than you get in the X1.

With its lower suspension, the M Sport gets the most out of the X2's very capable chassis; its bigger wheels have a tight grip on the road and really encourage spirited driving. This comes at considerable cost, though – the M Sport and M Sport X are pricey compared to other versions and their ride quality is somewhat on the firm side. A set of 19-inch wheels is standard and the optional 20-inch alloys have an even more pronounced effect on the ride.

The turbocharged 2.0-litre M35i is incredibly quick, covering ground at an astonishing rate. Yet, it feels somewhat muted and sensible compared with the excitable Cupra Ateca, coming across like a range-topping X2, rather than something truly special from BMW's M division.

The 2.0-litre diesel 187bhp engine appears in models with the xDrive20d designation, which also signifies standard four-wheel drive, and it can get from 0-62mph in 7.7 seconds. This brings greater traction on loose or slippery surfaces, but has a slight impact on fuel economy. Despite its generous power, the diesel isn't a particularly sporty engine; feeling better suited to long-distance cruising. The standard eight-speed automatic is smooth and responsive. 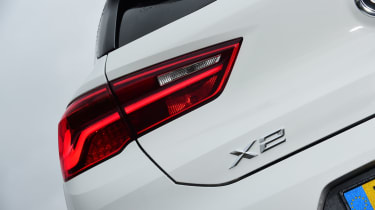 Front-wheel-drive sDrive18d models are fitted with a less powerful 148bhp version of the 2.0-litre diesel, and a four-wheel-drive xDrive18d is also offered. Zero to 62mph takes just over nine seconds.

The two-wheel-drive, 2.0-litre sDrive20i and four-wheel drive xDrive20i use the same engine fitted in the BMW X1, generating 189bhp and a 0-62mph time of under eight seconds. We've only tried a diesel so far, but the reduced weight of two-wheel drive means it's likely to feel more responsive, too, and could well be the most entertaining X2 to drive so we'd only recommend the four-wheel drive version if you do lots of your driving in rural areas.

With 302bhp, the BMW X2 M35i represents a big step up in power, and its standard four-wheel drive and eight-speed automatic gearbox launch it from 0-62mph in five seconds. The hottest X2 barely looks any different from a diesel in M Sport trim, disguising the fact it would beat a Honda Civic Type R in a drag race.

The discreet treatment continues inside and extends to the driving experience. The X2 M35i is unquestionably fast, but it's also quiet and its steering doesn't offer much feel, which robs it of the excitement delivered by a Cupra Ateca.