Small SUV crossover vehicles like the BMW X2 are designed to deliver the best of two worlds – the outer appearance of a powerful go-anywhere beast and the fuel efficiency of a family-friendly hatchback. This is one reason they have become so popular – everybody wants the look of the former but without exorbitant running costs.

The BMW X2 certainly delivers in the looks department and is a lot less thirsty than a full-size SUV. It can't quite match the BMW 1 Series hatchback for economy, though, particularly with the 187bhp 2.0-litre diesel engine and four-wheel-drive.

Nevertheless, claimed fuel-efficiency of up to 50.4mpg from the xDrive20d SE isn't bad at all and compares well with models from the top of the Mercedes GLA and Audi Q2 ranges. Its 122g/km CO2 emissions figure is equally competitive. 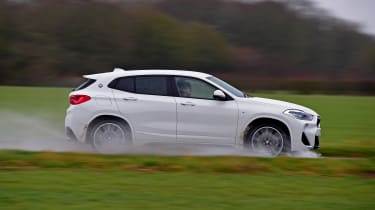 The front-wheel drive sDrive18d beats its more powerful counterpart with up to 55.4mpg economy and CO2 emissions of 119g/km. Meanwhile, the sDrive20i petrol doesn't disgrace itself, either. Even in the enthusiast's favourite M Sport trim, it returns 39.2mpg, with 135g/km emissions. Below that is the two-wheel drive sDrive18i, which returns up to 43.5mpg and offers company-car drivers the lowest Benefit-in-Kind (BiK) rating in the range. The petrol models will particularly suit those who make frequent short or urban journeys.

Stepping up to the M35i doesn't see fuel economy drop as much as you might expect, with up to 34mpg possible, but 158g/km emissions do put it in one of the highest BiK bands.

The BMW X2 broadly matches the BMW X1 for insurance costs. The xDrive20d SE is listed in group 29 while the less powerful sDrive18d SE sits in group 25. The sDrive20i occupies insurance group 29 as an SE or 32 as an M Sport. In comparison, the Audi Q3 starts in insurance group 19 for the 1.5-litre petrol, but the 2.0-litre petrol and diesel engines range from group 19 to 24.

BMW servicing is determined by an on-board system that monitors driving style, oil condition and mileage, along with various other factors. Service costs can be spread through BMW's fixed-price service contract scheme, which can be taken out for up to five years or 50,000 miles. There's also the option of a Service Inclusive Plus pack, which covers the cost of replacing 'wear-and-tear' parts such as the clutch and brakes.

BMW provides a three-year/unlimited-mileage warranty that matches Mercedes and beats Audi. It's a shame that premium brands can't equal the warranties of Hyundai or Kia, which offer five and seven-year guarantees respectively.