There's loads of space inside the BMW X4, but cheaper X3 is more practical overall

The front half of the BMW X4 proves little different to the X3 where it comes to everyday use. Things change from the rear doors back, and in isolation the X4 is as accommodating as most families could want. But its steeply raked rear roofline robs it of that last degree of versatility that makes the X3 such a great all-rounder. 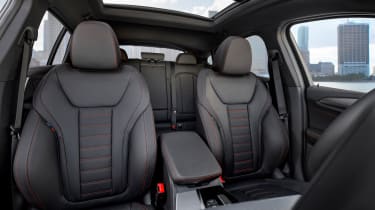 Climb into the BMW X4's elevated driving seat and the sensation is of a sports saloon fused with SUV. The view down the bonnet is commanding and there's an airy feel inside. The longer form of the latest X4 compared to its predecessor brings a 51mm increase in wheelbase – the distance between front and rear axles – and that extra length is most noticeable inside.

Not only will those in the front have no problem finding a comfortable seating position – a range of adjustment options for the seats ensures that – but only the tallest adults will find legroom in short supply unless the front seats are fully back. BMW says there's 27mm more than in the previous model. It makes no such proud boasts of headroom, though, and here the X4 is at a distinct disadvantage compared to the X3; a typical six-footer will brush the ceiling.

There's no storage of interior storage, though, and the optional 'Extended Storage' pack makes things even more convenient, bringing additional hinged compartments, 12V power sockets and USB ports, as well as handy lashing rails and hooks in the boot. 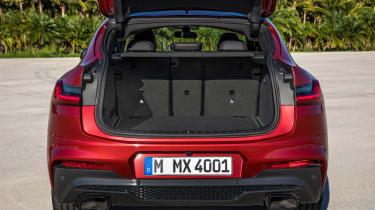 Speaking of which, the BMW X4 offers a decidedly non-coupe-like 525 litres of boot space with the parcel shelf in place, which can be extended to a huge 1,430 litres when the rear seatback is folded out of use and the parcel shelf retracted. It splits in three 40:20:40 sections. The boot space is wide and long and the powered tailgate aids convenience.

However, the load opening is smaller and higher than that of the X3, and its true versatility is limited by a steeply raked rear windscreen that scuppers any chances of carrying tall, bulky items. Although few will want to do so regularly, at least the X3 gives you the option – as well as 550 litres of load volume with all seats in place, or 1,550 litres in two-seat mode.