The BMW X4 gets off to something of a head start when it comes to interior design, by being virtually identical to its X3 sister. The dashboard is carried over with very few alterations, and feels equally at home in the X4's sportier interior surroundings. The X4 is a relaxing car to travel in, too. At motorway speeds, the loudest noise comes from those huge tyres, with a gentle rustle of wind round the door mirrors.

The X4 dashboard trades some of the glitz of rival cars like the Mercedes GLC – with its jewellery-like detailing – for a more straightforward, driver focused look. And it's none the worse for it.

It's clear and well ordered, gently wrapping around you to place all controls where you might expect to find them. It's well equipped, too. Every X4 M Sport has a semi-digital cockpit, while the X4 M Performance models (M40i and M40d) have a full digital instrument cluster. The standard 6.5-inch screen controls the DAB radio and sat nav that are standard on all models; it expands to a 10.25-inch touchscreen on the M Sport and M Performance.

Graphics are crisp and there's an intuitive control system – which can be improved still further with the optional Gesture Control system that uses a 3D sensor to read your hand movements. Voice control is on hand, too, and is claimed to understand more than just a list of pre-selected phrases, so you can interact with it in a more natural manner. Overall, the only slight disappointment with BMW's iDrive infotainment offer is the absence of Android Auto – Apple CarPlay is optional, as is a head-up display that BMW claims is 70% larger than that offered in the previous X4. 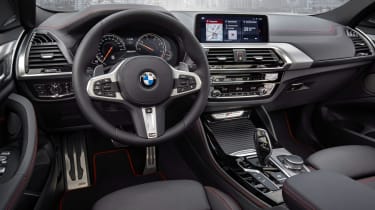 The BMW X4 range opens with the Sport, which few would describe as lacking in standard equipment. Three-zone climate control, Bluetooth and sat nav with real-time traffic information, DAB radio, adaptive LED headlamps, all-round parking sensors with a visual display, heated front seats with leather upholstery, an automatic tailgate and an eight-speed automatic gearbox all come as part of the deal. That's on top of 18-inch alloy wheels, sports suspension and steering and a three-mode 'Drive Performance Control' system.

Step up to the M Sport, though, and the X4's sporty character is more boldly underlined. An unmistakable M Sport bodykit brings a more aggressive look, with gloss-black trim in place of the bright finish of the Sport. The wheels grow to 19 inches and M badges appear in prominent locations. Inside, sports seats set the mood, with an M Sport steering wheel and aluminium interior trim. Technology-wise, the instrument cluster goes semi-digital and the larger 10.25-inch infotainment touchscreen is included.

The next step up the ladder – M Sport X – brings a different design of 19-inch wheels and upgraded 'Icon' headlights with an auto-dipping function. There's a panoramic sunroof, too, and a larger fuel tank is fitted.

M Performance is the penultimate trim level and comprises the M40i and M40d. Here, the wheels grow to 20 inches and split trapezoidal exhaust pipes are among the special recognition points. An M Sport braking system and differential won't be seen by many, but promise an even sharper drive. Inside, the M40d and M40i include a digital cockpit, power-adjustable seats with memory function and a dashboard clad in BMW's 'Sensatec' man-made leather.

Billed as a standalone trim level, the X4 M Competition gets model specific ‘M’ sports seats and seatbelts, along with 21-inch two-tone alloy wheels. It also gets a head-up display with unique ‘M’ performance display, and a Harmon Kardon premium stereo system as standard.

BMW's ConnectedDrive services are standard across the range and offer a number of online features that work across your car, computer, smartphone and smartwatch – and even a home system like Amazon Echo. It enables you to plan routes remotely before uploading them to your car's navigation system, check fuel levels and even lock and unlock the car and turn its lights on remotely.

BMW is famed for its lengthy options lists and – despite being well equipped from the outset – the X4 offers enormous scope for further personalisation. BMW's Individual service lives up to its name, offering endless combinations of soft Merino leather upholstery colour combinations, which can be teamed with a special Piano Black trim finish.

Individual components from each of the above packages can be ordered, as can rear-seat heating, a power-folding tow bar, auxiliary heating and two grades of speaker upgrade. You can also choose alloy wheels up to 21 inches across, all of which have run-flat tyres, apart from the standard 18-inch style. Nevertheless, a space-saver spare is only supplied as an option.