BMW makes bold claims as to the X4's driver appeal – and the car's aggressive intakes, muscular haunches and big wheels make certain promises, too. When we drove the BMW X3 – which is virtually identical to the X4 under the surface – we were very impressed by its behaviour on challenging roads, so does the more overtly sporty X4 bring extra excitement?

The answer is yes – but only just. From that high-set driving position, the X4 feels sportier than its pure-SUV sibling, and the view over that high waistline is more sports-saloon on stilts than family workhorse. The illusion continues when you hit the road, and the slightly tweaked suspension genuinely does provide the X4 with a sharper, more engaging feel than the X3 – but few will be able to tell the difference without driving both cars back-to-back.

The X4 shares the X3's impressively smooth ride quality, though – even on the biggest wheels, despite rock-hard run-flat tyres being fitted as standard. Things are even smoother when comfort mode is selected on the optional Adaptive Damping system, while the standard eight-speed Steptronic automatic gearbox is as responsive as you'd want. A Sport version that incorporates a launch-control function is standard on all but the xDrive20d.

Perhaps less relevant to many drivers, yet reassuring nonetheless, are BMW's claims of off-road prowess. All X4's have xDrive four-wheel drive and the design of the car's suspension and underbody allow a claimed 50cm water fording depth, with steep approach and departure angles to tackle impressively bulky obstacles. Its traction-control system is said to make easy work of gravel, snow and steep inclines, too. 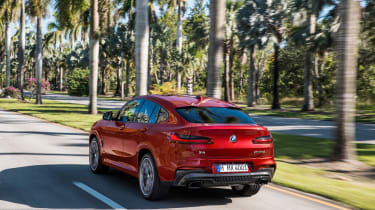 The BMW X4 line-up is dominated by diesel engines, and none can be accused of being short on power. The entry-level xDrive20d produces 187bhp, which is enough for a 7.9 second 0-62mph time.

The six-cylinder xDrive30d introduces extra smoothness as well as boosting power to 282bhp. It brings the 0-62mph time down to 5.7 seconds – impressively quick, but not as impressive as the twin-turbocharged M40d. With no fewer than 335bhp on tap, and despite a weight of almost two tonnes to cope with, it can take the X4 from 0-62mph in 4.9 seconds.

Only two petrol engines are offered in the X4 line-up, with the emphasis squarely on performance. The X4 M40i is powered by a twin-turbo 3.0-litre six-cylinder engine producing 349bhp. It does 0-62mph in 4.8 seconds and goes on to a top speed of 155mph.

The range-topping X4 M Competition uses a twin-turbocharged 3.0-litre engine sourced from BMW’s M Division producing a thunderous 503bhp. This makes it the quickest X4 you can buy, sprinting from 0-62mph in 4.1 seconds, with a limited top speed of 155mph.