It was never intended to be ‘sporty’, but the Citroen C3 Aircross is well behaved on the road, with enough grip for most drivers and excellent comfort. Push too hard and the front tyres will begin to squeal as they lose purchase on the tarmac, but there’s nothing that will catch you out about how it drives.

Passengers and driver alike should also appreciate a relative lack of body lean, which – along with light yet precise steering – helps to make the Aircross feel more like a supermini than an SUV from behind the wheel. The extra height of the Aircross also improves its ride quality, with longer, softer springs than some rivals. That said, potholes can still send a shudder through the Citroen's body, but it’s noticeably smoother than crossovers like the SEAT Arona or Hyundai Kona, while less satisfying for enthusiastic drivers than the sharp SEAT. 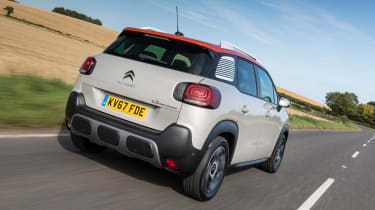 The 1.5-litre BlueHDi engine is familiar from models like the Citroen C4 Cactus and is one of the best small diesels on sale. We’ve sampled the 99bhp version (which is now the only available diesel) and not only does it accelerate with conviction from low revs, it’s also smooth until much higher in the rev range. It’s a shame, then, that the gearbox doesn’t feel more precise and that the chiselled shape of the gearlever itself could be more comfortable to hold.

Acceleration from 0-62mph takes 10.8 seconds – two tenths faster than the equivalent Renault Captur – and its top speed is 114mph.

The 1.2-litre turbocharged PureTech petrol is available in the C3 Aircross with 109 or 129bhp. An entry-level 81bhp version is no longer available but we’d suggest avoiding it on the used market, as its 14.1-second 0-62mph time is sluggish, even before you’ve loaded the car up with people or luggage.

Conversely, the range-topping 129bhp engine is probably more powerful than it needs to be. We suggest the mid-ranking PureTech 110 makes a good compromise. In our tests, it accelerated from 0-62mph in just 10.1 seconds, which should be more than sufficient for most. The automatic, however, could only manage the sprint in 10.7 seconds when we measured it, but it proved impressively flexible in each gear, easily outpacing the MG ZS. The automatic can’t match the Arona’s DSG gearbox for its swift changes, but it’s smoother and less prone to causing jolts at low speeds, so suits the C3 Aircross pretty well.

Sadly, as with the diesel, our main complaint is the long throw of the manual gearbox, which is a common Citroen bugbear. It also occasionally crunches into gear.