Super-comfortable and well equipped, but the Citroen C5 Tourer has an interior that falls behind the quality of the latest models

Out-and-out comfort is the C5 Tourer’s trump card and it’s at its very best as the top-of-the-range Exclusive Techno model. This version comes with Citroen’s Hydractive 3 adjustable suspension system, which does an excellent job of ironing out bumps in the road. It also offers a variable ride height, so the car hunkers down at motorway speeds for added stability and can even be raised up to cope better with the odd bumpy track if needs be. The top-of-the-range car also gets laminated side windows with a layer of plastic sandwiched between two panes of glass, which keep noise out better than the standard items.

Even the basic C5 is set up for comfort and the conventional suspension is more cosseting than what you get in rivals such as the Volkswagen Passat. All models also come with an acoustic windscreen that further staves off wind noise, as well as rear parking sensors that make the C5 easy to park as big family cars go.

Citroen hasn’t just made the outside of the C5 look classier; it’s clearly taken some lessons from the German brands on the inside, too. The interior feels properly screwed together, there’s a sense of quality to the buttons on the dashboard and touch points (such as the interior door handles) are made of metal that’s cold to the touch. 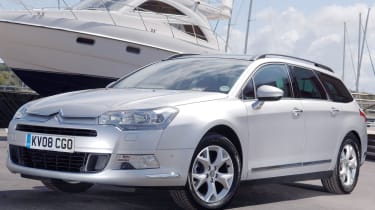 What’s also nice is that some of Citroen’s distinctive French character remains, so the centre of the steering wheel is fixed (with only the rim moving in your hands) and the C5 can be specified with lighter interior colours than the mainly dark plastics that Volkswagen favours.

The only problem facing the C5 is that, while it unquestionably feels better built than Citroens of old, cars like the latest Volkswagen Passat and the new Ford Mondeo have moved things on even further. Both come with a colour display that’s used to control most of the cars’ systems – allowing Ford and Volkswagen to cut down on the need for conventional buttons.

No doubt conscious that the C5 has fallen behind its main rivals, Citroen has attempted to win back points by providing a decent amount of standard kit – including air-conditioning, all-round electric windows and cruise control, but also useful additions such as rear parking sensors and Bluetooth phone connectivity. Lights that follow the direction of the steering wheel are a rare option in this class, but are fitted as standard in the C5.

You can add plenty of options to the C5 Tourer. A panoramic glass roof (£605), bright xenon lights (£890) that change direction and leather seats with massage function (£975 on Exclusive+ and £2,035 on VTR+) are available on both VTR+ and Exclusive models.

A hi-fi system can be added for £550 to Exclusive+ models, while larger alloy wheels can also be added.