As with the original, the latest Dacia Duster delivers astounding practicality for the price

Of all the virtues that buyers look for in a family SUV, practicality and versatility are perhaps the most pressing. Fortunately for Dacia, the Duster really impresses here – not because of any particularly clever design thinking or innovation, but because you get so much SUV for its modest price.

At 4.3 metres long by 1.8 metres wide, the Duster is almost the same size as the far more expensive Nissan Qashqai – and this is just as true inside as out. It also brings the much-loved SUV staple of a high driving position, with a view from the driver's seat unmatched by most family cars at any price.

That sizeable exterior conceals a passenger compartment with space for five. Three adults will tolerate even long journeys seated three abreast on the rear bench. With an upright seating position, the driver is unlikely to complain of a lack of legroom, although headroom is adequate, rather than generous. Isofix child-seat mounting points are fitted to the outer rear seats.

The interior is usefully provisioned with storage compartments, too. Dacia boasts there's up to 28.6 litres of space for the odds and ends of family duty, with handy cupholders ahead of the gearstick, and substantial pockets on all four doors. Front-wheel-drive models have extra storage space under the rear seats, too. 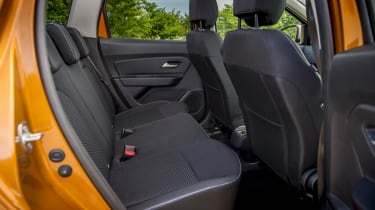 The Duster Access' rear seatback isn't split – there are either three rear seats in play or none at all. You need to move up to Essential trim or above for a 60:40 split. Neither version folds entirely flat, but total load capacity of 1,623 litres is still vast – and usefully bigger than the 1,585 litres of a Nissan Qashqai. Bi-Fuel versions are fitted with an LPG fuel tank on the production line, but as this sits in the spare wheel well, a can of tyre repair foam is included for emergencies.

With the rear seats in use, the Duster's boot is still impressive at 445 litres, though four-wheel drive models drop to a still-substantial 411 litres due to extra mechanical hardware. By comparison, a Volkswagen Golf hatchback only manages 380 litres.