The Dacia Duster is based on tried-and-trusted Renault mechanical parts. As a model that's designed to deliver value above all else, it doesn't exactly break any technological barriers, which means it goes without some of the French company's latest and most economical engines.

However, although its fuel-economy figures don't shine, a low initial purchase price, surprisingly low depreciation and reasonable maintenance and insurance costs mean the Duster should prove relatively affordable in daily use.

No version of the Dacia Duster comes close to offering headline-grabbing fuel-economy figures. The Renault Captur – from Dacia's sister company – uses more sophisticated petrol and diesel engines and delivers more impressive fuel economy as a result. However, if you don't plan to cover a huge annual mileage, the Duster's higher fuel consumption is unlikely to break the bank.

A combined fuel economy figure of 57.7mpg from the 1.5-litre dCi 115 diesel engine isn't bad at all, nor are CO2 emissions of 128g/km. The latter means that company-car users can expect to pay a lower Benefit-in-Kind (BiK) tax rate. Initially, the diesel engine was only available with front-wheel drive, but now you can choose to have four-wheel-drive. This does make the car more expensive and reduce economy to 51.3mpg, plus the 145-147g/km CO2 output means it's in a slightly higher BiK bracket.

In Comfort trim, the diesel engine costs £2,000 more than the petrol – and that'll buy an awful lot of fuel. Those who cover fewer than around 12,000 miles a year, or who make a lot of short, urban journeys, might be better off with the TCe petrol engine, which despite its small size, has more torque than the 1.6-litre petrol it replaced. It also has a respectable claimed fuel economy figure of 46.3mpg and a CO2 emissions figure of around 138-141g/km, representing a lower BiK liability.

Buyers can also pick a TCe 100 Bi-Fuel model capable of running on either petrol or LPG. This uses the same 99bhp 1.0-litre petrol but has a 34-litre LPG fuel tank under the boot floor. It is capable of up to 44.1mpg and emits 145g/km when running on petrol, with 35.5mpg and 129g/km possible when running on LPG gas. The major benefit is that LPG - available at around 1,400 filling stations - is around 40% cheaper than petrol, allowing high-mileage drivers to save money. At least they will once the £400 price premium has been recouped after around a year, and despite the slightly lower mpg figure when using LPG. It's also worth noting that as with LPG conversions, the Duster Bi-Fuel can't be taken on the Channel Tunnel, but Dacia says it is safe to be used in underground car parks.

The smaller petrol engine is your only choice if you want to buy the entry-level Access model. We'd recommend moving up the trim levels in order to get the turbocharged 1.3-litre petrol engine if you can afford it, as it's punchier, more powerful and more efficient too. Regardless of whether you choose the 128bhp or 148bhp model, the engine returns 42.8mpg and CO2 emissions of 149g/km in two-wheel drive spec. Opt for four-wheel drive with the 148bhp petrol engine, and economy takes a slight hit falling to 39.2mpg with CO2 emissions increasing to 162g/km.

Road tax costs £150 a year, although the first year's tax is likely to be included in the price. The Bi-Fuel version qualifies as an alternative fuel vehicle, so costs £10 less per year in road tax. 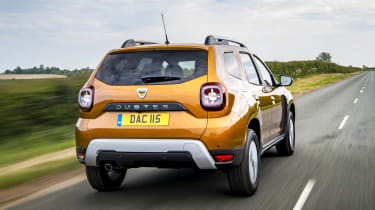 The Association of British Insurers (ABI) has announced that insurance-group ratings for the latest Dacia Duster range from groups nine to 11 for the petrol engine and groups 13 to 14 for the diesel, depending on trim level. This means the latest Duster undercuts rivals such as the Nissan Qashqai – which occupies insurance group 13 and above – on insurance costs, but our advice is that you always seek a quote before you make a purchase decision.

Every Dacia requires annual servicing, or more frequently if you cover more than 12,000 miles a year. Dacia service centres usually share workshops with Renault and both brands use similarly qualified technicians, so Dacia service expertise isn't hard to come by. Costs should be reasonable, too, and a maintenance package is available that makes it easy to budget for scheduled work.

Owing to the Duster's SUV nature, tyres are among the priciest consumable items you'll need to factor for, but even the price of these is made reasonable by 17-inch wheels being the biggest offered in the Duster range. Brakes and many other mechanical parts are shared with Renault models.

Dacia provides a three-year/60,000-mile warranty on every new car it sells in the UK, and this can be extended to up to seven years/100,000 miles at extra cost – the latter being equivalent to the warranty provided by Kia.