Dacia models have traditionally had a mixed safety record, because in its efforts to make cars as affordable as possible, some of the latest safety technology has been left out. Sadly, the latest Duster is no exception, because despite having the most comprehensive kit so far, it could only muster three stars in Euro NCAP tests.

Dacia also has work to do if it wants to improve customer satisfaction, with a worrying last-place performance in our 2020 Driver Power owner survey, 15 spots behind parent company Renault.

In our 2019 Driver Power survey, the Dacia Duster came 72nd out of 100 cars, but it failed to appear in our 2020 results. Less impressive is the Dacia brand’s performance out of 30 manufacturers, where it came last. This is sure to be a concern for prospective buyers. Of the Dacia owners who responded, 17.2% said they’d experienced at least one fault within the first 12 months of ownership.

Reliability is not the main concern for owners; poor scores were awarded for interior quality, infotainment and driving pleasure. Dacia has consistently come last for expectations of in-car technology in the last six-years. However, this is to be expected given Dacia’s reputation as a no-nonsense, budget brand. 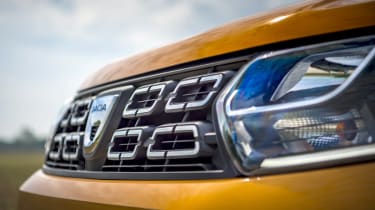 Unfortunately the picture isn’t much rosier here, because in 2017 Euro NCAP only awarded the Dacia Duster three stars out of five – one of the lowest ratings in the small SUV class. Scores of 71% and 66% in the adult and child occupant protection categories point towards the Duster having tough bodywork in a collision, but a low 37% score in the Safety Assist category badly affects the overall rating. This takes into account active safety equipment like autonomous emergency braking (AEB) that can help avoid collisions – but isn’t offered in the Duster. Features like blind-spot monitoring have been adopted from Renault, but only on top-spec versions.