"The Dacia Duster is the best-value SUV on the market today. It’s a rugged, practical and simple machine that can be surprisingly fun to drive"

The Dacia Duster is proof positive that buying and running a fashionable family SUV needn't break the bank. With prices that significantly undercut the Nissan Juke, Renault Captur, Ford EcoSport and Vauxhall Mokka, the Duster is not only inexpensive, but beats many rivals for practicality, too.

Coming close to a Nissan Qashqai in terms of size, the Duster boasts a 475-litre boot and enough interior space for a family of five. And although it's not the most sophisticated-looking car you can buy, it has as much street presence as a far more expensive SUV and the range-topping models are very smart indeed. 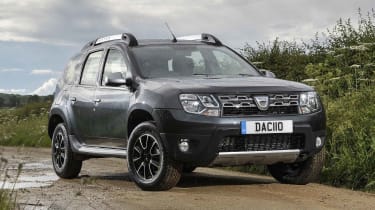 "You get what you pay for", says the old adage, and the least expensive Dacia Duster Access has a far shorter standard equipment list than most other cars you can buy. Some will find it hard to live without air-conditioning, a radio or Bluetooth phone connectivity, but those for whom such kit doesn't matter will find its rock-bottom price rather alluring.

In fact, the bare steel wheels and black bumpers give the cheapest Access a rather purposeful look, although many will prefer the body-coloured bumpers and alloy wheels of higher-specification models. Although the feature-count increases with every pound you spend, there's not much variation in interior feel – this isn't a car likely to delight you with tactile materials and imaginative design, but everything is durable and solidly screwed together.

The model line-up was updated for 2018, but still opens with the bargain-priced Access. This only offers one engine, a relatively old-fashioned 115bhp 1.6-litre SCe petrol, but it's a tried-and-tested design and four-wheel drive is available, which makes it comfortably the least expensive 4x4 SUV you can buy.

The Duster Air is rather better equipped, with air-conditioning and a stereo with DAB radio, USB and auxiliary sockets as well as Bluetooth connectivity. You also get a height-adjustable driver's seat and body-coloured front and rear bumpers, with foglamps and smarter 16-inch wheels brightening the exterior.

Our favourite engine is the 64.2mpg 1.5-litre dCi 110 diesel, but the 1.2-litre TCe 125 petrol is less expensive and can return a reasonable 46.2mpg. It'll do nicely for those who cover fewer than around 12,000 miles a year or make lots of short or urban journeys. The 1.6-litre SCe is 115 is cheapest of all and only a little less economical at 44.1mpg, but excessive noise and a lack of overtaking urge betray its aged design.

One Duster disappointment is its safety rating – the independent experts at Euro NCAP only awarded it three stars; unimpressive when rivals hold five-star ratings. This doesn't mean the Duster is unsafe to travel in, but its crash-prevention and driver-assistance systems lag behind the competition, while pedestrian safety is poor.

In other respects, though, there really isn’t a huge amount of compromise in the Duster; it offers solid value for money and is an intelligent choice for anybody who needs a spacious, no-nonsense family car with the ability to cope with tough treatment. If you choose one of the better-equipped models, you won’t feel short-changed.