At this price, there’s nothing more practical – the Dacia Duster has a boot that shames a Golf or Focus and beats several SUVs, too

As we’ve mentioned already, the Dacia Duster offers impressive bang for your buck in nearly every area – and practicality is no exception.

A high driving position makes the Duster surprisingly easy to park – the square, boxy styling means there are few hidden extremities to hit other objects. Visibility is excellent, too, thanks to some big, square windows. The view out the back isn’t compromised, either, owing to a pair of big door mirrors and some slim door pillars.

There’s a decent amount of passenger space front and rear – three can sit in comfort in the back. This is particularly impressive given the small amount of space the Duster takes up – it’s actually shorter and narrower than a Ford Focus. 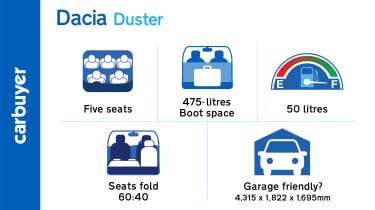 There are plenty of cubbyholes dotted around inside, too, from cup-holders to a large glovebox and a storage bin in the dashboard.

The boot is a good size, too: it’s much bigger than a Vauxhall Astra’s, but lags behind rivals like the Kia Sportage and Mazda CX-5 with the rear seats in place. But the Duster still provides some of the best boot-space-per-pound you’ll find anywhere.

There’s an impressive 475 litres of luggage room with the rear seats in place, dwarfing the more expensive Ford Focus hatchback, which makes do with only 316 litres. Fold the seats down and that expands to a massive 1,636 litres – compared to the Ford’s 1,101 litres. In fact, it’s almost identical in size to the Ford Kuga SUV’s (456 and 1,653 litres) and that car costs well over twice as much as the Dacia. 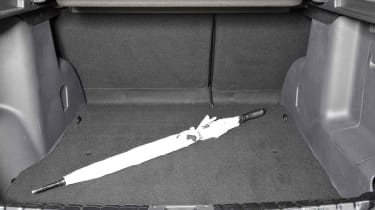 It’s worth noting that split-folding seats aren’t included on the basic model – so you’ll need to choose between carrying passengers to the shops or that bulky wardrobe to the tip.

Loading is easy, though, thanks to a low boot lip, but the seats don’t fold completely flat. Plus, the boot opens upwards, like a hatchback, rather than the awkward side-hinged arrangement on the Ford EcoSport. That means you can open the boot in tighter parking spaces than you could with the Ford.

While optional four-wheel drive and SUV looks mean the Duster is pretty tough, its 1,500kg towing capacity is less than that of most SUVs, and specifying the diesel engine doesn’t see this limit rise.