With one look at the Dacia Duster you can guess it won’t drive like a Ford Focus, but isn’t far behind its SUV rivals for performance or handling.

Behind the wheel of the Dacia Duster, the soft, pliant suspension that lets it ride so smoothly, becomes a flaw when it’s driven enthusiastically on a twisty road. There’s rather pronounced body lean and the car will sway from one corner to the next – in terms of composure it can’t hope to compete with fun-to-drive SUVs like the Ford Kuga or Mazda CX-5 – although these are considerably more expensive.

With vague steering that gives you little sense of what’s going on, you quickly learn that hard cornering is not the Duster’s forte and that its talents lie elsewhere. To give the Duster its due, it really is very good for relaxed cruising when its smooth ride quality can come to the fore, helped by big, deep tyres with lots of sidewall to absorb road surface imperfections.

The manual gearbox is easy to use, although not the most precise we’ve ever used. You get a five-speed gearbox in SCe 115 petrols and a six-speed in the TCe 125 petrol and dCi 110 diesel – the six-speed is considerably more relaxed at motorway speeds, its high top gear ratio reduces engine revs when cruising.

The six-speed EDC automatic really is very good indeed, responding quickly to commands to kick down through the gears and changing smoothly from one ratio to the next, although it can sometimes feel a little lazy, holding gears for longer than you might expect. 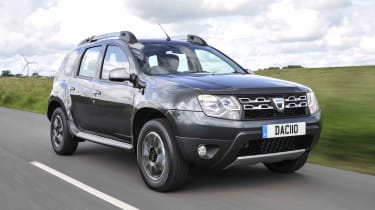 The basic Access and mid-range Air come with a 1.6-litre petrol engine that’s quite noisy on the motorway, but all things are relative, and given it’s the cheapest SUV on the market by some margin, we can forgive it to a certain extent. It needs to be pushed hard to achieve the claimed 11-second 0-62mph time, while four-wheel-drive models take a leisurely 12 seconds to reach the same speed.

The more powerful 123bhp turbocharged 1.2-litre petrol offers better performance, with front-drive models taking 10.2 seconds to do the 0-62mph sprint. Four-wheel-drive models, however (thanks to their extra weight) take 11 seconds. It costs less to run than the 1.6-litre, but you can only have this engine in the top Nav+ trim level, so you have to spend more to get it in the first place.

Even though the 109bhp diesel engine offers more or less the same performance as the petrols, it actually feels slightly quicker. That’s because more of the engine’s power is available at lower speeds, which means you don’t need to work it quite as hard. But, as with the petrols, the diesel is noisy on the move, and there’s a fair degree of vibration transmitted into the car, too.

It’s not short of power – 0-62mph is quoted in 11.8 seconds for the two-wheel-drive car and 12.4 seconds when four-wheel drive is specified, but performance against the clock only tells part of the story. In fact, at normal driving speeds the diesel rarely feels out of breath and always has overtaking power when you need it.