A three-star crash safety rating seems disappointing, but owners are very happy with how reliable the Dacia Duster is

The Dacia Duster is a no-nonsense budget car, but that doesn’t necessarily mean the ownership experience is poor. In fact, Dacia owners are some of the most satisfied in the UK. However, while the Duster is in no way an unsafe car, newer rivals offer a higher degree of protection in a crash, as well as technology to help avoid a crash in the first place.

Dacia is still relatively new to the UK, but has already managed to establish a good reputation for reliability. Of Dacia owners who participated in our 2017 Driver Power satisfaction survey, 11.2% reported experiencing one or more faults with their cars within the first year of ownership – a figure that's only just behind that of Dacia's parent company Renault.

However, the brand still suffered the ignominy of finishing last in 2017s survey. Dacia's 27th-place finish came down to combination of weaknesses, with owners disappointed by the interior appointments, noise, performance and ride quality of their cars. It wasn't all bad news, though – owners are very happy with low running costs of Dacia cars, including fuel economy, maintenance and insurance.

And if that doesn’t put your mind at ease, the three-year/60,000 mile warranty (which can be extended to five or seven years) might. 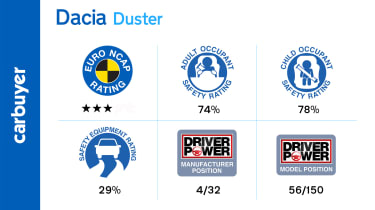 The Duster only received three stars in Euro NCAP crash tests when it was originally tested – a disappointing result for an SUV, as most cars in this class get the maximum five stars. It has since been re-tested and while it retained its three-star rating, the scores it received in specific areas were a little lower.

In 2017's retest, the Duster was rated at 71% for adult occupancy protection and 66% for how it looked after children in a crash. These lower scores haven't been assigned because the Dacia isn't as safe as it once was – it's because standards have become more stringent since it first went on sale.

The Duster also lacks much of the latest safety equipment that rivals can offer, either as standard of optionally, and more expensive rivals like the Nissan Qashqai have the Duster well and truly beaten in this category.