The Dacia hasn’t been through a money-no-object development programme to make it the last word in driving pleasure. Its mechanical layout and components are there simply to get the job done with the least possible fuss and bother. Generally speaking, it’s comfortable, too.

And although driving enthusiasts are better served by a Ford Focus Estate, there’s nothing wrong with the way the Logan MCV acquits itself in bends. The steering feels a little inert and heavy, but this is less of an issue at higher speeds and corners can be taken with confidence. There’s a fair bit of body lean at speed, but we feel this is preferable to a hard ride. However, although its smooth most of the time, it can feel rather unsettled and bouncy at higher speeds on uneven roads.

The Logan MCV Stepway has a taller ride height than the regular model and this naturally affects the way it drives. The result is even more pronounced lean in corners – although 16-inch alloy wheels and relatively wide tyres mean there’s no shortage of grip. However, we recommend against making a habit of driving the Stepway too exuberantly, as it’ll only lead to complaints from your passengers.

The Stepway is far more accomplished at cruising on the motorway in relatively serene comfort. Its longer suspension means road bumps are even more well smothered than in other Logan models and passengers get a slightly better view out, too, thanks to the extra height.

All models have a five-speed manual gearbox and it could have a slightly smoother action, but it doesn’t feel too loose. The lack of sixth gear is noticeable on motorways, though, particularly with the diesel engine, which drones a little at higher speeds. The Logan is an easy car to drive, although the pedals don’t feel as sharp and precise as they could do.

There are three petrol options available for the Logan MCV: the two 1.0-litre models consist of a basic non-turbocharged version and a more powerful ‘Bi-Fuel’ version offering petrol and LPG running. The third option is a 0.9-litre engine; if you want a petrol Logan, we'd recommend it over the 1.0-litre options, as it offers the best performance of the trio but costs less to buy than the petrol/LPG version. 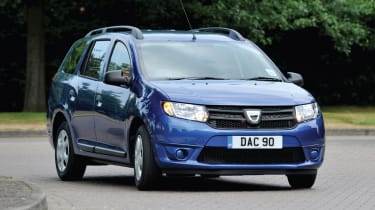 The performance of the more expensive 1.0-litre TCe 100 Bi-Fuel model puts it between the other two petrols, thanks to a 0-62mph time of 11.6 seconds. This is because of the extra weight of the car when compared with the faster TCe 90 model.

The 1.5-litre Blue dCi diesel engine has noticeably more low-speed pulling power than the petrols and will get the Logan MCV from 0-62mph in 12.4 seconds. This extra mid-range grunt means the diesel is the only of the three engines that doesn’t feel rather out of its depth when the Logan MCV is fully laden. We can’t recommend the 1.0-litre TCe 75 unless you rarely carry anything but a very light load.