With ‘MCV’ standing for ‘maximum capacity vehicle’, you expect the Dacia Logan MCV to be a very practical car – and it doesn’t disappoint. No other model on sale in the UK offers so much space for so little money. 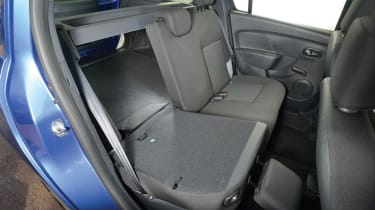 Rear-seat passengers don’t fare too badly when it comes to head or legroom. The Laureate version of the Logan MCV gets three rear headrests, grab handles and map pockets. The Ambiance model also has a boot light and a luggage cover that incorporates a shallow storage shelf behind the rear seats, but you don’t get either of these on the lower-spec models. 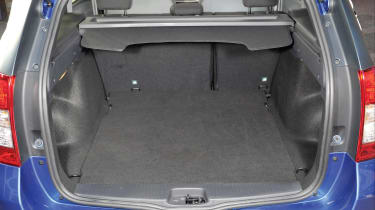 With the rear seats in place, the 573-litre boot in the Dacia Logan MCV is 43 litres bigger than the one in the Skoda Fabia Estate and only 32 litres short of the Volkswagen Golf Estate. With the rear seats folded and the car loaded to the roofline, the Logan MCV's boot capacity expands to an impressive 1,518 litres. The beefier rear bumpers of the Stepway come into their own when you’re loading heavy items – they provide a handy flat surface on which to rest bulky items before manoeuvring them in.

There’s not much in the way of polish in the luggage compartment; plastics are tough but rather basic in their looks, and there’s a lot of painted metal surfaces on display that lend it a somewhat unfinished appearance, particularly on the inside of the tailgate itself.

All models of the Logan MCV are capable of towing a maximum braked trailer load of 1,110kg.