Dacia’s biggest selling point as a brand is how inexpensive its cars are, so it’s also important that they’re cheap to run. If you avoid the petrol engine in the entry-level Access model, the Dacia Logan MCV offers very reasonable running costs.

Partly because it’s so cheap to buy, depreciation isn't too ruinous. What's more, Dacia dealers aren’t really open to haggling, so the sticker price is generally the price you actually pay for the car. Dacia does have a range of finance options to make its cars even more affordable, however.

The entry-level Logan MCV now uses a basic non-turbocharged 74bhp 1.0-litre petrol engine that’ll return up to 49.5mpg and emits 129-134g/km of CO2. Company-car users will find that results in a reasonable mid-range Benefit-in-Kind (BiK) rating. In comparison to what many small and efficient petrol engines currently available can achieve, these figures aren’t particularly impressive, especially when you consider performance isn’t that good, either. 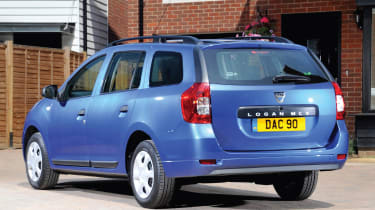 Far better is the 0.9-litre turbocharged petrol TCe 90 engine that’s capable of 47.1mpg, but has more power and much better performance. It has CO2 emissions of 134g/km placing it in the middle of the BiK bandings. If the majority of your journeys are likely to be short trips, then this engine is likely to be a cost-effective buy – particularly as it’s less expensive than the diesel.

The most powerful engine is also the most economical behind the diesel engine, with the 1.0-litre TCe 100 Bi-Fuel capable of 49.6mpg and 129g/km when running on petrol. Switching to LPG results in fuel economy of 39.2mpg and emissions of 116g/km.

However, the 1.5-litre Blue dCi 95 diesel is our favourite in the range, not just for its 62.4mpg fuel economy, but also for the way it drives. It has a decent amount of pulling power and that’s just what you need if you want to make full use of the Logan MCV’s carrying capacity. Meanwhile, its 115-116g/km CO2 emissions place it towards the higher end of the bandings for company-car users.

The service interval on all Dacias is one year or 12,000 miles, whichever comes sooner. Parts are readily available and inexpensive, because so many are shared with parent company Renault. A standard service will set you back £150 excluding parts.

There’s also the option of Dacia’s three-year service plan, which costs just over £500 and covers all maintenance for the first three years or 36,000 miles of ownership. This is a flat rate across models in the Dacia range.