DS 7 Crossback diesel and petrol engines are decent, but the plug-in hybrid could be the one to go for when it arrives in 2019

The DS 7 is the first luxury SUV from a French manufacturer and while it clearly needs to handle sharply enough to compete with rivals, DS has also made comfort a priority. To this end, most versions are fitted with Active Scan Suspension – a technology only seen before in models like the Mercedes S-Class luxury saloon. Cameras constantly monitor the road ahead, adjusting the stiffness of the suspension if you’re about to hit a pothole or bump.

It’s a clever system and for the most part the DS 7 does ride more comfortably than the Peugeot 3008 that shares the same basic underpinnings. It's not infallible, though, and doesn't seem to make a huge difference until you reach 40mph. Urban potholes can still unsettle the car if 19 or 20-inch wheels are fitted, too. 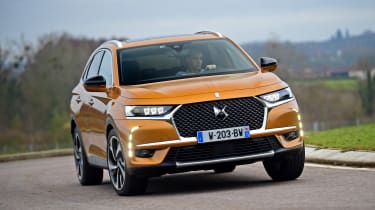 Of its four driving modes to choose from, the Active Scan only functions in Comfort mode. The other modes include Eco, Normal and Sport, altering the response of the engine, steering and suspension depending on which you choose, but none can give the DS 7 anything like the sharp reflexes of the BMW X3.

It's easy to drive, though – the steering is a little numb, but you can rely on its accuracy and it weights up progressively in corners. Body lean doesn’t get too exaggerated and the eight-speed automatic gearbox dispatches gears without too much fuss. It’s also fairly free from wind and tyre noise – which bodes well for the E-Tense version – but the 2.0-litre diesel is too noisy for such a premium product.

While more engines will be added later, the launch model gets either a 1.5-litre BlueHDi 130 engine with 128bhp or a 2.0-litre BlueHDi 180 with 178bhp. While the smaller engine has a manual gearbox and the option of an eight-speed automatic, the BlueHDi 180 comes as standard with the automatic; it takes 9.4 seconds to get from 0-62mph. This should be plenty quick enough for most families, but is somewhat off the pace of the Q3 (7.9 seconds) and X1, which manages it in 7.6 seconds.

Choosing Sport mode also pumps an artificial engine sound through the speakers as you accelerate, which is a bit at odds with the car and can’t fully mask the somewhat strained sound of the diesel. Some customers in rural areas may also be surprised to find there’s currently no four-wheel-drive option, even with the top engines.

The DS 7 is available with three petrol engines: at the start of the range, there's a 1.2-litre turbocharged engine with 128bhp. Above that is a powerful and very smooth 1.6-litre turbocharged petrol producing either 178bhp or 222bhp. That’s enough to get the DS 7 from 0-62mph in 8.3 seconds, making it the fastest version in the range until the E-Tense plug-in hybrid arrives.

Like the top diesel, power is fed to an eight-speed automatic gearbox that supplies just the front wheels. The X1 xDrive20i only has 189bhp, but it's four-wheel drive and manages to nip ahead in the 0-62mph dash, taking 7.4 seconds. A manual gearbox is standard on the 1.3-litre engine, but unavailable on the other petrol engines. The cheapest engine is available on all but the top trim levels.

With close to 300bhp from its 1.6-litre turbo petrol engine and dual electric motors, the DS 7 Crossback E-Tense is an unlikely performance car, doing 0-62mph in 5.9 seconds. In reality, the extra power of the hybrid helps the car stand toe-to-toe with upmarket German rivals, including the hybrid BMW X3 and Mercedes GLC.

A smooth eight-speed automatic transmission makes sure there's no problem smoothly overtaking slower traffic or powering on to a motorway. A more affordable 222bhp version with front-wheel drive is also on the way, and it's likely to be a sweet spot in the range, with enough performance for most SUV drivers.

The added weight of a battery pack isn't usually a positive attribute but here it does at least help settle the DS 7's suspension, which can be unsettled in the regular car.