For such a big car, the Ford Grand C-MAX 1.6-litre diesel has very low CO2 emissions

The Ford Grand C-MAX offers a great range of Ford’s tried-and-tested TDCi diesel engines, which are punchy and economical – and the EcoBoost petrols aren’t bad either. It costs about the same as other mini MPVs, too.

If it’s outright fuel economy you're after, then the best engine to go for is the 118bhp 1.5-litre diesel, which claims economy of 57.7mpg and emits 131g/km of CO2. Opt for the automatic gearbox and the bigger 17 or 18-inch wheels, and these figures drop to 51.4mpg and 145g/km. Road tax for any Grand C-MAX is £140 a year. A diesel shouldn’t necessarily be your default choice if you want good fuel economy and low CO2 emissions, however. Ford’s EcoBoost petrol engines are superb, and despite their small capacities, they’re pretty punchy, so you don’t have to sacrifice performance. Some versions of the EcoBoost engine available in the Grand C-MAX even have lower CO2 emissions than the diesels, although their fuel economy isn’t quite as good. 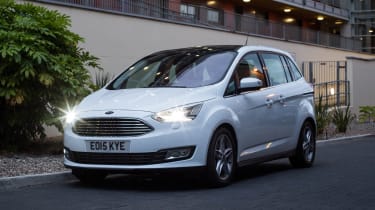 The 1.0-litre 99bhp and 123bhp models both return 47.9mpg and emit 133g/km of CO2, so they boast relatively low Benefit-in-Kind (BiK) bills for company-car drivers. The more powerful 1.5-litre Ecoboost can only be teamed with an automatic gearbox so is considerably less economical, offering 35.8mpg and emissions as high as 182g/km. It's worth noting that the EcoBoost petrol's official economy figures can be quite a way off the real-world economy buyers can expect, however. You should only choose the petrol EcoBoost engines if you drive fewer miles and carry fewer people than would normally be expected with a car of this type.

Insurance groups are relatively low for the Grand C-MAX – they all tend to be around the bottom third of the table. EcoBoost petrol models start at group 13 and finish at 19, while the diesel versions kick off at 16 and rise to group 20.

Ford offers a three-year/60,000-mile warranty with the Grand C-MAX, which is about average for the industry. The same applies to the majority of its rivals, with the exception of the Renault Grand Scenic’s excellent four-year/100,000-mile warranty cover.