The Ford Grand C-MAX’s boot is tiny with all seven seats up, but it expands to offer van-like load space when needed

The seven-seat Grand C-MAX has more overall space than the conventional five-seat version – just don’t expect to make use of it all when the back two seats are upright and in use. Fold them down though, and you have a large boot.

As far as space for passengers is concerned, there's plenty of room in the second row for adults. The third row of seats is only spacious enough when the middle row seats have been moved forward, compromising legroom. Visibility is superb and the driving position is excellent, with the seat and steering wheel fully adjustable to ensure you can get comfortable. 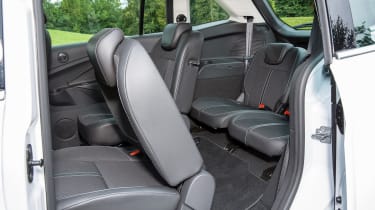 The sliding rear doors prove useful in car parks and are very handy for families lugging children and their associated baggage in and out – there are also ISOFIX child-seat mounts on two of the second-row seats. However, practical though it is, the Grand C-MAX’s cabin is narrower than it looks, so if you need more space, you may be better off going for the larger Ford S-MAX instead.

It’s immensely practical inside the Grand C-MAX, but with all seven seats in place there’s only a meagre 65 litres of boot space left, which is barely enough for the weekly shop. Fold down the third row of seats, though, and the boot space expands to 448 litres, which is which is more than you get in most family hatchbacks. 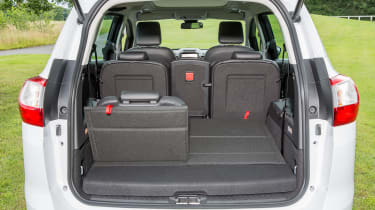 When you do need that little bit of extra space for transporting large or bulky items, the second row of seats also folds down flat to offer a pretty enormous 1,715 litres of capacity – and there’s no boot lip to speak of, so loading bulky items is easy. There's a space-saver spare wheel as standard.

The Grand C-MAX isn’t a great car for towing but all models can manage a braked trailer with a maximum weight of 1,200kg. Ford offers a detachable tow bar, priced at around £600.