The Ford Grand C-MAX has positive feedback from customers, but its three-star safety score is a concern

Ford has a middling reputation for reliability according to our Driver Power customer satisfaction survey, but the good news is the Grand C-MAX finished inside the top half of the latest edition. Safety could be a worry for families though, because Euro NCAP only awarded it three stars.

The Grand C-MAX came in 34th place out of 75 models in our Driver Power 2018 customer satisfaction survey. That's an impressive result, particularly as older models tend to drop in the rankings – the C-MAX was in an almost identical position in 2017. 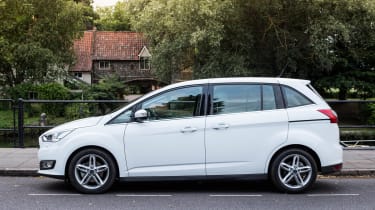 The previous Grand C-MAX featured a five-star safety rating, but when Euro NCAP assessed the model under its latest testing procedures, it could only manage three out of five stars. It was largely held back by its poor 29% score in the Safety Assist category, which looks at the advanced accident prevention features fitted to the latest models. Scores were mediocre across the board, with 76 and 60% respectively for adult and child occupant protection, along with a 59% score for pedestrian safety.

An optional Driver Assistance Pack costs £450 and comes with a series of electronic aids, such a lane-keeping aid to warn you if you’re veering out of your lane, automatic lights and windscreen wipers, auto dimming rear-view mirrors and a traffic-sign recognition system to remind you what the speed limit is.

Ford's Active City Stop autonomous emergency braking system used to be fitted as part of this pack, but now comes as standard with all trim levels.