"The Ford Focus Electric offers ultra-low running costs, but it's expensive to buy and is already starting to look dated next to its rivals" 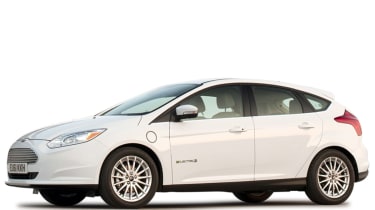 Before the Focus Electric, Ford had never offered an all-electric car to the general public. In concept, it combines the green credentials of electric power with the practical, popular design of the UK’s bestselling medium family hatchback.

These ingredients ought to be enough for guaranteed sales success, even against talented rivals such as the Renault Zoe, Nissan Leaf and Hyundai Ioniq Electric, but there are a few factors that prevent the Focus from being quite as compelling as it could be. 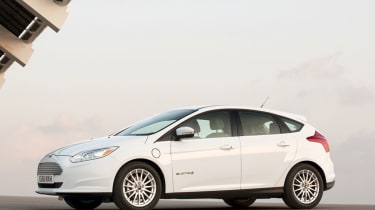 Being based on the Ford Focus gets Ford’s electric offering to a good start on paper, as we rate Ford’s family hatchback very highly for the way it combines excellent handling with comfort and practicality. Unfortunately, converting a car usually powered by petrol or diesel throws up a number of compromises from which purpose-built electric cars don’t suffer. The same is true of the Volkswagen e-Golf.

With 143bhp, the Focus Electric manages 0-62mph in 11 seconds. It’s not an impressive figure on paper and belies the nippy feeling provided by the electric motor’s instantaneous response. Its 33.5kWh battery pack provides a claimed all-electric range of 140 miles, and can be fully charged in five hours from a 32 amp home charging socket. If a fast-charging DC point is used, an 80% battery recharge is claimed to take half an hour.

Despite its feisty acceleration from a standstill, the Focus Electric is, sadly, a far less rewarding car to drive than the petrol or diesel powered versions. The heavy rear-mounted batteries take their toll on the car’s balance, and what used to feel nimble and sure-footed has a far more cumbersome feel, while stiffer suspension means it doesn’t ride as smoothly, either.

Those batteries also mean the Focus Electric can’t carry as much family paraphernalia as a normal Focus, making it less useful day-to-day. It’s not a distinctive car to look at either; barely anything sets the Electric apart from any other high-spec Focus.

At least the plentiful equipment helps to justify the Focus Electric’s high price – it’s considerably more expensive to buy than the Renault Zoe, a car that’s barely less practical for everyday use, and the more upmarket Volkswagen e-Golf. That said, with its extremely low Benefit-in-Kind (BiK) rating, the Focus Electric could save urban company car users a lot of money on tax payments compared with a similarly equipped diesel model.

As you'd imagine, the Ford Focus Electric costs little to run - a single charge costs only a few pounds

One of the biggest appeals of low-emissions cars is the low rate of Benefit-in-Kind (BiK) tax they offer company car drivers. The Focus Electric is rated in the lowest 9% category, which means that – despite its higher taxable P11D value – it will cost far less in yearly tax payments than the much cheaper, but 23% BiK rated, 2.0-litre diesel version. For urban company car users, this alone will mean the Focus Electric makes a lot of sense.

For those who make routine short urban journeys, electric power could actually prove less fuss than petrol or diesel driving. There’s no need to make trips to the filling station, but you will need to settle into a routine whereby your car is charged and ready to go before the morning commute.

Although you can use a domestic three-pin plug to charge the Focus Electric overnight, owners are wise to invest in a 32A charger – a £300 accessory – to reduce charge time to five hours. The Focus Electric is compatible with high-speed DC charging points, too, which promise an 80% boost in charge after 30 minutes. A full charge should cost only a few pounds.

Zero CO2 emissions means the Focus Electric is exempt from VED (road tax), as well as many urban congestion charging schemes, including the one operating in London. Maintenance costs should be similar to any other Focus – although it’s worth consulting your local Ford dealer to make sure its workshop is equipped to deal with electric models.

The Focus Electric occupies insurance group 20, the same as the 1.5-litre Ecotec petrol Focus in its most powerful form. The Volkswagen e-Golf is rated in the same insurance group.

Reasonable performance considering extra weight, but not as much fun as the standard car

The electric motor in the Focus Electric develops 143bhp – significantly more than the Volkswagen e-Golf – taking the Ford from 0-62mph in 11 seconds. The way the electric motor delivers all of its power instantly means it doesn’t hesitate when pulling away quickly at junctions and roundabouts, ensuring the electric Focus feels much quicker than its performance figures suggest. 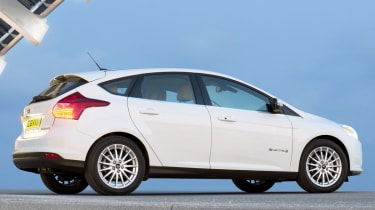 Less enjoyable is the system that captures the energy created when you brake – it can often make the braking action feel sudden and grabby – even when you only press the pedal lightly.

The suspension is firmer than on the conventional Focus – an attempt to prevent the extra weight upsetting the car's handling. However, this doesn't quite work. When cornering, you can feel the extra bulk over the rear wheels, meaning this electric-only Focus isn't as much fun to drive as the standard car.

However, given the Ford's range and the fact it's meant for urban use, buyers probably won't be hugely concerned with its performance – the real problem for Ford is that the BMW i3 offers a better driving experience and longer range for the same price.

The Ford Focus Electric is pleasant inside, but suspension is quite firm

As the technology in the Focus Electric makes it quite expensive compared to other models in the range, a high level of standard equipment has been fitted in an effort to soften the blow of the high price tag. The spec is based on the conventionally powered Focus Titanium trim level, so you get comfortable part-leather seats and a high-quality dashboard. The steering wheel and seat can be adjusted in several directions, so most people should be able to find a good driving position.

The suspension has been made a lot firmer to counter the 300kg weight of the two batteries, and this hasn't done the ride quality any favours – lumps and potholes are more noticeable than in a standard Focus. 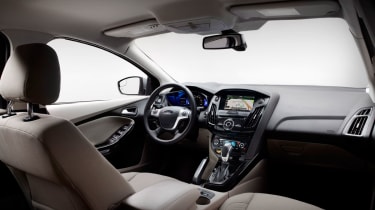 All new Focus models have thinner window pillars at the front and rear, which ensures good all-round visibility. The Focus Electric is only capable of 85mph, but even at motorway speeds it's virtually silent, apart from a little wind and road noise.

The Ford Focus wasn't originally designed to accommodate a pair of large batteries, so the Electric’s power unit isn't as neatly packaged as it is in some purpose-built electric cars. This means the Focus' already-small 316-litre boot is reduced in size to an even less versatile 237 litres.

The 140-mile all-electric range of the Focus Electric is given as 140 miles, which should be ample for a typical suburban commute, while the ability to top up by 80% within half an hour at a DC fast charge point means that longer forays aren’t out of the question. If you can’t predict how far your daily drive will take you, though, this may not be the car for you.

The claimed battery range is comparable with the Nissan Leaf, but a little lower than the 186-mile claimed range of the Volkswagen e-Golf. If you want to combine the potential of zero-emissions driving with the lifeline of a backup power supply, the BMW i3 REx Range Extender is a viable alternative, with an on-board petrol-powered generator to recharge the battery if needs be.

The Ford Focus range has, generally, made improvements in reliability and customer satisfaction over the years. In our 2017 Driver Power owner satisfaction survey, it was ranked 51st out of 75 cars covered, and although reliability was rated as below average, only 7.7% of owners reported one or more faults developing within the first year of ownership.

The Focus was rated as below average in almost every other regard, including, surprisingly, for its ride and handling. It’s worth remembering that the Focus Electric isn’t individually accounted for within the overall result, though, so the ‘average’ rating for MPG and running costs ought not apply – while the same is true of the Focus’ above-average rating for its engines and gearboxes.

The Ford Focus range scored the full five stars in its Euro NCAP crash safety test, and comes with front, side and curtain airbags, a lane-departure warning system and a driver tiredness monitor. The Focus Electric also has a system that immediately detects when you have a puncture.

Even when you consider that the Ford Focus Electric comes with a Sony DAB digital radio, sat-nav system, cruise control and part-leather seats, it still seems expensive. After the government’s £4,500 grant for electric vehicles has been applied, the car is still roughly the same price as a BMW i3, which is more interesting to look at and to drive, has a longer range and the same low company car tax rating.

The Nissan Leaf and Renault Zoe are also cheaper, as is the Volkswagen e-Golf, although this is subject to the same limitations as the Focus, having not been developed as an electric car from the outset.

The only optional extras you can choose for the Focus Electric are a “premium” metallic paint finish for £525 and rear parking sensors for £225.