Although Fords are usually thought to be durable, they don't have the same rock-solid image as cars made by some competitors. Ford has thrown everything it has at making the new Mondeo safe, as demonstrated by its five-star rating from Euro NCAP.

The Ford Mondeo didn’t feature in our 2019 Driver Power owner satisfaction survey of cars currently on sale in the UK. However in previous years, the Mondeo returned poor results - hopefully Ford have remedied the issues in the meantime.

Ford finished 23rd out of 30 manufacturers in the 2019 survey, which isn’t a great result. Of the Ford owners who responded, 14.8% reported experiencing a problem with their car at least once in the first year, and low rankings for exterior styling, build quality, practicality, space and interior comfort didn’t help the overall score. The SYNC 3 infotainment system, however, was something owners were very happy about. 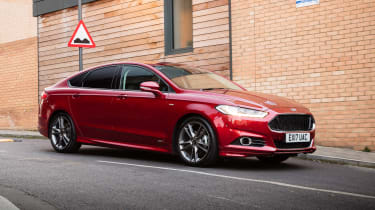 A feature that none of the Mondeo’s rivals offer is inflatable rear seatbelts, which hold the wearer in place more effectively during a collision. The only trouble, though, is that they’re not compatible with all child seats – so be sure to check this before you buy.