The Ford Mondeo is more relaxing and comfortable than the old car, but it’s not as much fun to drive

The first thing you'll notice when you get the keys to a new Ford Mondeo is how much more grown-up it feels compared to the old car. It's quieter and more comfortable, but has lost some of the qualities that made its predecessor so engaging to drive.

The steering is quicker and lighter, but has a lot less feel, so it doesn't inspire as much confidence in fast corners. The same can be said about the suspension, which is now more comfortable than ever, but also allows more body lean in bends. So if you're looking for a family car that’s fun to drive, the Mazda6 is now the standout choice. 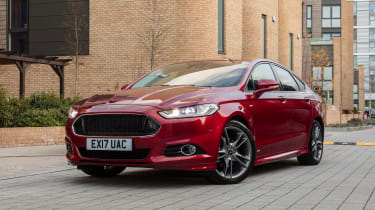 In 2020, both the 1.5-litre and 2.0-litre EcoBoost petrol engines were discontinued, leaving the 184bhp 2.0-litre hybrid powertrain as the only petrol option for buyers. Performance is best described as adequate, with a 0-62mph time of 9.2 seconds (identical to the old 1.5-litre petrol engine).

For the most part, you’ll hardly notice the switch between the petrol engine and electric motor, with the engine shutting down when coasting in town or on a motorway. At lower speeds, the hybrid power works well, with the 1.4kWh battery pack providing a small amount of pure-electric running for urban driving. However, if you need a burst of acceleration, you really have to work the engine hard, which produces a coarse engine noise and little in the way of speed regardless of how hard you apply the throttle.

The 187bhp 2.0-litre diesel we tested was more disappointing; it's quiet, but never feels as quick as its 0-62mph time of 8.9 seconds suggests. Around town, this engine can sometimes feel a bit inflexible, too: it sometimes seems like it might stall if you change up to second without a good dose of power. If you plan to buy a Mondeo diesel, the 148bhp model is slower with a 0-62mph time of 9.7 seconds, but is much more economical than the hybrid model.

We'd recommend the 148bhp 2.0-litre diesel over the Mondeo Hybrid, which can't match the low running costs of the basic diesel. Its hybrid technology already feels outdated and the CVT automatic gearbox causes a constant drone from the engine when accelerating.

It's quiet when crawling in traffic, but diesel is the better choice, as it has a proper gearbox and suits the Mondeo's natural habitat of the motorway. The hybrid's significant added weight and less grippy, low-resistance tyres also mean it's the least fun-to-drive model in the range.